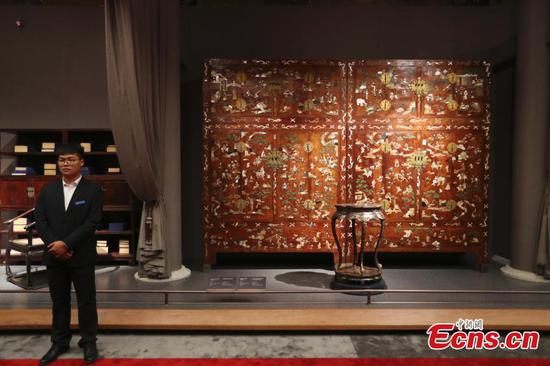 (ECNS) -- The Palace Museum has for the first time put more than 300 pieces of furniture from the Qing Dynasty (1644-1911) on display as part of efforts to display more cultural relics to the public.

The exhibition is being held at Nandaku, or "the Grand Southern Warehouse,” which was the biggest warehouse in the palace during the imperial years. The museum started to revamp the facility in 2015 for a furniture display.

Staff member Zhao Yingying said the first stage of the exhibition includes more than 30 pieces of fine furniture mainly crafted during the reign of emperors Kangxi (1662-1722), Yongzheng (1723-1735) and Qianlong (1736-1795). Multimedia, lighting effects and elaborate stage designs have been employed to improve visitor experiences.

The exhibition is planned to house more than 2,000 pieces of furniture in the future.

The Palace Museum currently has more than 6,200 pieces of furniture from the Ming (1368-1644) and Qing dynasties in its collections.