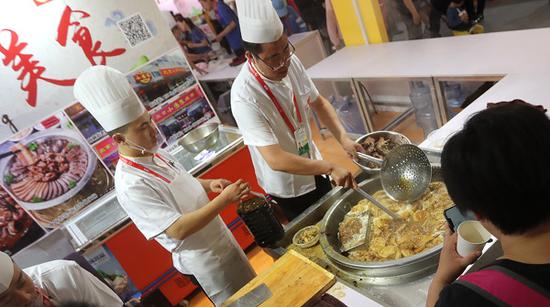 A tourist tastes a traditional Beijing snack, luzhu huoshao－pig intestines and lungs cooked together with bean curd－at the Asian Food Festival in Beijing on Thursday. (Photo provided to China Daily)

Civilization Week features variety of activities, including art and shows

Various cultural activities, including art performances, parades and food festivals, are offering visitors a taste of the colorful cultures of Asian countries.

The Asian Food Festival runs until Wednesday. It has received wide attention from the public, has its main venue between Beijing National Stadium, commonly known as the Bird's Nest, and the Beijing National Aquatics Center, or Water Cube.

Food-related activities are also being held in three other cities-Hangzhou, Chengdu and Guangzhou. Visitors can enjoy a pepper eating competition in Chengdu, or attend a food container exhibition in Hangzhou, Zhejiang province, according to event organizers.

"I'm excited about the Asian cuisine festival," said Li Jingyun, who came to the main venue of the festival on Thursday with four friends.

"We went to Thailand for a vacation last month. The beautiful sunshine and beaches there are enchanting," the 54-year-old Beijing native said. "Now, we have a second chance to experience its food."

Yang Lin, 26, who described herself as a foodie, also went to the gala. "I love Korean food most, except for Chinese cuisine, and I'm happy that Beijing is holding such a big food exhibition."

Xu Hejian, a Beijing official in charge of the event, said visitors can see how Asian food is made at the venue and sample various cuisines made by more than 200 food enterprises.

Wuyutai Tea is one of the companies.

"It's a good opportunity for the younger generation to learn more about traditional Chinese delicacies and desserts," said Chen Huaji, an employee. "Tea is quite an important element of Chinese culture, and the exhibition offers a stage to show off the essence of Chinese food and Chinese culture."

Besides tasting food, such as Beijing roast duck and traditional snacks, visitors can take in a parade involving 28 teams from Asian countries at the main venue, Xu said.

The parade, with singing and dancing, is held twice a day. Members of the public who want to experience the food festival and parade at the main venue need to register online in advance at www.damai.cn.

During Asian Civilization Week, the public can attend several cultural performances, films or exhibitions with Asian features at lower prices or free.

For example, an Asian arts exhibition will be held at the Beijing 798 Art Zone next week, said Wang Xiuqin, an official from the China Arts and Entertainment Group.

"Our aim is to help more people understand Asian culture and attend related activities," he said.