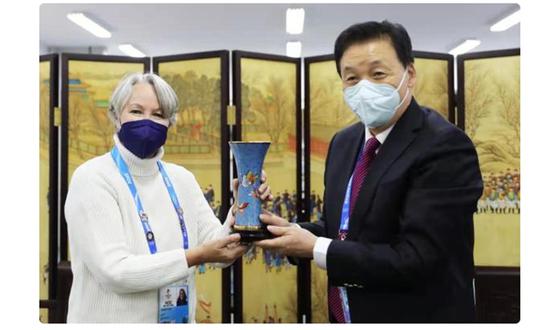 The U.S. Olympic and Paralympic Committee thanked the Beijing Winter Olympics organizing committee for holding such an impressive event and the Chinese Embassy in the U.S. for its assistance for the U.S. delegation to visit China to participate in the competition, and it also spoke highly of the great significance of the Ping-Pong Diplomacy 51 years ago for bilateral ties.

Experts viewed it as an epitome of the strong friendship between the peoples of China and the U.S., and said that sports are beyond politics. They hoped that decision-makers in the U.S. would get the message to do something good for the development of bilateral ties on the occasion of the 50th anniversary of former U.S. president Richard Nixon's 1972 trip to China.

Susanne Lyons, chair of the U.S. Olympic and Paralympic Committee (USOPC) recently congratulated the Beijing Organizing Committee for the 2022 Olympic and Paralympic Winter Games, for holding a successful event amid the epidemic, saying U.S. athletes were very satisfied with the facilities and services at the Beijing Winter Olympics, which were "impressive," media reported on Wednesday.

Lyons also thanked the 2022 Olympic and Paralympic Winter Games (BOCOG) and the Chinese Embassy in the U.S. for offering assistance to the U.S. delegation to attend the Games. Lyons made the remarks during a meeting with Yang Shu'an, deputy chair of BOCOG, on February 12 in the Beijing Winter Olympic Village.

Athletes from the U.S. shared with the Global Times in previous interview about how they received attention and felt satisfied at the Games when speaking of the delicious food, warm-hearted volunteers and perfect snow venues.

The Ping-Pong Diplomacy that happened 51 years ago, when the little ball moved the big ball, was of great significance. The achievements of China-U.S. relations over the decades could not have been made without friendly exchanges between the table tennis players of the two countries 51 years ago, Lyons noted.

As to Ping-Pong Diplomacy, Yang said 2022 is of great significance for China and the U.S., adding it was the sports fields of the two countries that created the beautiful memories of the Ping-Pong Diplomacy. Taking the Beijing 2022 as an opportunity, he hoped the committees of the two countries could extend a new chapter for sports and people-to-people communications, and present the voices of people from both China and the U.S. to pursue peace and mutual development.

Yang praised Lyons for opposing the politicization of sports and upholding the Olympic spirit, and for leading the U.S. delegation to participate in the Olympics and play a positive role for bringing U.S. athletes to compete at the Games.

This meeting between the USOPC and BOCOG, as well as the positive reactions of athletes from the two countries at the Winter Olympics, came in the bigger picture of China-U.S. ties that have experienced twists and turns - even retrogression, Li Haidong, a professor from the Institute of International Relations of China Foreign Affairs University, told the Global Times on Wednesday.

But these positive signals are exactly an epitome of the strong friendship between the peoples of the two countries, and sports are beyond politics, Li noted.

Li believed it will add new hope and impetus to the positive development of the China-U.S. relationship, especially on the occasion of the 50th anniversary of Nixon's 1972 trip to China, and wished that the decision-makers in the U.S. would get the message.