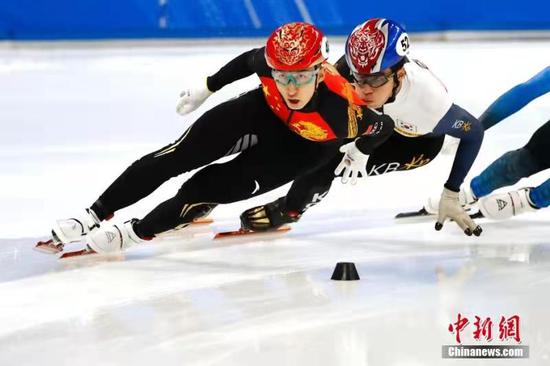 China's Wu Dajing and Ren Ziwei won the titles in men's 500m and 1,500m events respectively in the ISU World Cup Short Track Speed Skating series in Dordrecht, the Netherlands on Saturday, putting their rivals on alert ahead of the Beijing 2022 Winter Olympics.

Olympic silver medalist Ren took a clear lead from 55 seconds in the men's 1,500m final and gave his opponents no chances to close the gap. With the victory, Ren has stamped himself as one of the favorites to win what would be his first individual Olympic medal in Beijing.

In the women's race, Kim Boutin of Canada won the 500m title while World Cup leader Lee Yubin from South Korea claimed the title in 1,500m.

Also on Saturday, Team China, composed of An Kai, Li Wenlong, Ren Ziwei and Sun Long, came in second to book their spots in the men's 5,000m relay final.

The event, which serves as a qualifying tournament for the 2022 Olympic Winter Games, ends Sunday with the 1,000m and relay races.