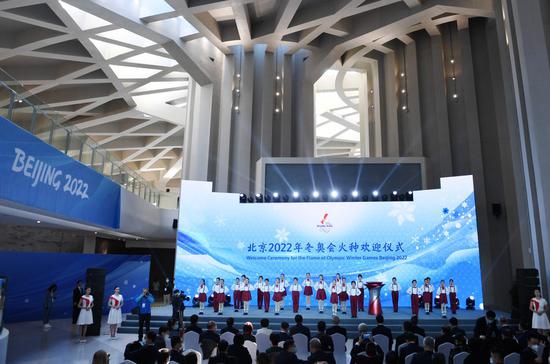 A welcoming ceremony was held at the Olympic Tower in Beijing, China on Oct. 20, 2021. (Xinhua/Zhang Chenlin)

The Olympic flame, ignited for the Beijing 2022 Olympic Winter Games in Ancient Olympia in western Greece, arrived in Beijing on Wednesday morning.

A welcoming ceremony was held at the Olympic Tower, an iconic landmark from the 2008 Beijing Olympic Games. The ignition and handover process of the Olympic flame in Greece was reviewed at the ceremony before Cai Qi, secretary of the CPC Beijing Municipal Committee and president of the Beijing 2022 Organizing Committee (BOCOG), took over the flame and lit the cauldron.

Zhang Jiandong, vice mayor of Beijing and executive vice president of BOCOG, said ensuring the health and safety of all participants is the top priority as the Olympic and Paralympic Winter Games approach.

A series of torch relay activities, including an Olympic flame display, is scheduled with the slogan "Health, Joy and Energy."

In accordance with the concept of delivering "a streamlined, safe and splendid Games," the scale of the torch relay will be reduced to ensure the health and safety of the public.

According to the BOCOG, the Olympic flame will be initially displayed at the Olympic Tower in Beijing, and will then tour China, aiming to spread the Olympic spirit and engage more people to participate in ice and snow sports.

From February 2 to 4, 2022, an offline torch relay featuring 1,200 torchbearers will be held in the three competition zones of Beijing, Yanqing and Zhangjiakou.

The online torch relay will feature virtual reality, WeChat mini programs and other promotional programs to attract more people to join in.

The Beijing 2022 Olympic flame lantern, torch relay symbol and torchbearer uniform made their public debuts during the ceremony, all of which were designed with inspiration from traditional Chinese culture.