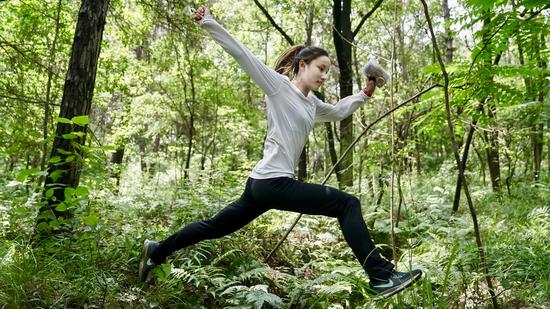 On the first orienteering training, Li Meizhen sank into frustration as the former middle-distance running champion swallowed a bitter pill – she came in last due to her unfamiliarity with using a map.

At the end of 2018, she was determined to leave her comfort zone and went into orienteering. It is a sport where competitors (individual or team) navigate from point to point using a map and compass in the shortest time possible.

"Simply speaking, athletes should run based on the route marked by the map. They need to run fast and find the task site for checking quickly and accurately. Therefore, the reading map matters a lot," explained Tao Dezhou, the orienteering coach of Bayi athletics team.

According to International Military Sports Council (CISM) regulations, the sport requires endurance, strength and sturdiness to run in the forest, excellent map navigation skills, and decisiveness.

"Before getting to know the sport, I thought it was quite simple – just running. Later, I found it was not easy," said Li. The biggest difficulty for her was understanding how to use a map. "I try to chase them every day. My teammates run once and I run twice." But the unyielding girl eventually caught up with others.

Li wounded herself several times throughout the nine months of training. Unlike running on a track, competitors running at high speed in a jungle must contend with the complex terrain, while simultaneously navigating the best route.

"Orienteering is a must for soldiers. It's a dangerous sport – a game for brave people, which tests the willpower," said Coach Tao. The injury rate is also high, "like bruises, sprains, stumbles. Also watch out snakes and wasps.”

"One's life may not be a victory, and I just don't want to lose. Orienteering resembles life which is always with fatigue and hope, difficulty and surprise," said the home competitor, who is ready to make her orienteering debut in the upcoming 7th world military games.