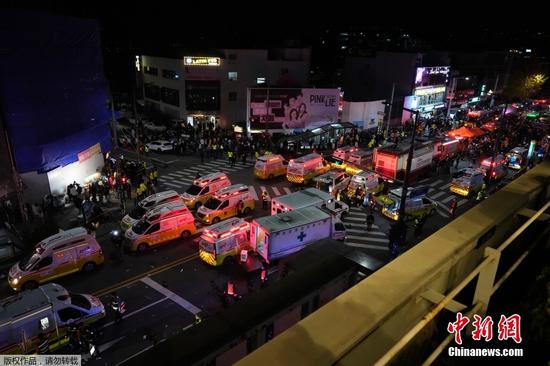 Three Chinese nationals are confirmed killed in a stampede that occurred at Itaewon, a district in Seoul, Oct. 29, 2022. (Photo/China News Service)

Three Chinese nationals have been confirmed killed in a stampede that occurred Saturday night at Itaewon, a district in Seoul, during Halloween gatherings, the Chinese embassy in South Korea said Sunday.

The Chinese embassy said shortly after the stampede that it immediately activated an emergency response mechanism, contacted the South Korean side overnight to learn about the cause of the accident and the nationalities of the victims, and paid close attention to the Internet and social media platforms to see if any Chinese nationals were seeking help.

The Chinese embassy has offered condolences and will provide assistance to the families of the deceased.

As of 9 a.m. local time (0000 GMT) Sunday, the accident has left 151 dead and 82 injured, according to the South Korean firefighting authorities.