At least 151 killed in stampede at Seoul's Halloween festival 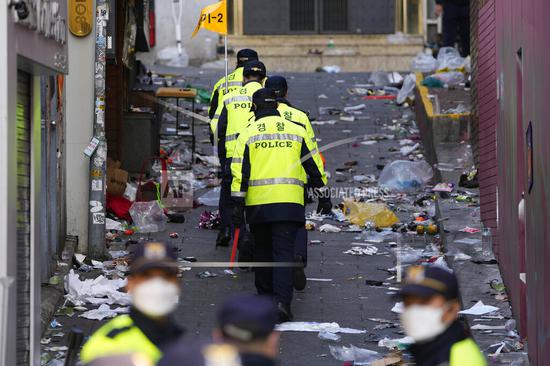 Police officers work at the scene of a fatal crowd surge, in Seoul, South Korea, Oct. 30, 2022. A mass of mostly young people celebrating Halloween festivities in Seoul became trapped and crushed as the crowd surged into a narrow alley, killing dozens of people and injuring dozens of others. (Photo/AP)

(ECNS) -- At least 151 people have died from a stampede following a massive turnout for the Halloween weekend in Seoul's Itaewon neighborhood, AP reported.

Those killed or hurt were mostly teenagers and people in their 20s, AP cited Choi Seong-beom, chief of Seoul’s Yongsan fire department, as saying.

An estimated 100,000 people had gathered in Itaewon for the country's biggest outdoor Halloween festivities.

Online videos show emergency workers and pedestrians desperately performed CPR on people lying in the streets after the crush on Saturday night.

The dead included 19 foreigners, of whom three Chinese nationals have been confirmed. Other nationalities weren't immediately released. The death toll could rise further as 19 of those injured were in critical condition, AP said.

It's the worst disaster in years in South Korea.

The South Korean government eased COVID-19 restrictions in recent months and this was the first big chance to get out and party for many young people.