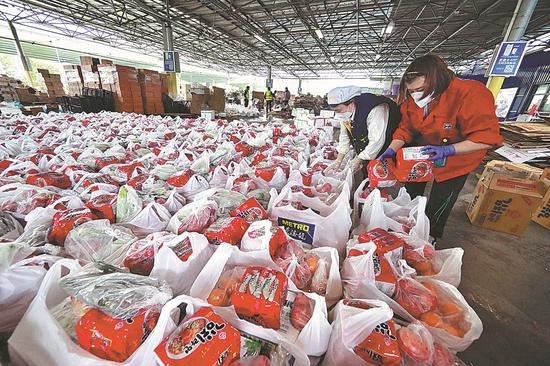 China's adherence to the dynamic zero-COVID strategy continues to play an essential role in protecting the country's elderly population and in preventing a collapse in medical systems, especially in less developed areas, medical experts said.

With its extraordinary mobilization capacity, the dynamic zero-COVID strategy remains the best option for China, they added.

Wang Huaqing, chief immunization planning expert at the Chinese Center for Disease Control and Prevention, said the Omicron strain should not be downplayed as a seasonal flu because it can cause death and bring severe risks to the elderly who are unvaccinated and suffer from chronic illnesses.

"After Omicron became the dominant strain, the global number of new infections and new deaths have both peaked," he said during a news briefing on Tuesday.

In the United States, weekly COVID-19-related death counts exceeded 15,000 for five straight weeks at the peak of Omicron's surge. Hong Kong is battling the fifth wave of a local outbreak, as people age 60 and older run a 252 times higher risk of dying from Omicron infections than do people up to age 30 and younger, according to data cited by Wang.

"The ratio of severe cases and deaths among unvaccinated seniors remains relatively high, which is highly concerning to experts," he said.

China has the world's largest elderly population. Official data shows about 267 million, or nearly 19 percent of its total population, are age 60 or older.

Take Shanghai, a metropolis of 25 million people that is coping with the local spread of Omicron as an example. "If we lie flat (meaning lifting COVID-19 restrictions), there might be an unbearable death toll for the elderly and other vulnerable groups," Wu Huanyu, deputy director of the city's disease control and prevention center, said during a news briefing.

Liang Wannian, a member of the expert panel sent by the State Council's Joint Prevention and Control Mechanism to Shanghai, said last week that among those age 80 and older, the fatality rate of Omicron is 10 times higher than that of seasonal flu.

If the novel coronavirus' spread is left unchecked in Shanghai, "it is inevitable that many seniors will get infected," Liang said. "If we relax our precaution for one bit, the potential harm to them and other vulnerable groups will be immense."

Immunization coverage among the elderly in China is not yet sufficient to fend off the virus' risk to the group.

The National Health Commission said as of Monday, nearly 80 percent of people age 60 or older had completed primary inoculation, but only 150.8 million had received a booster shot, which can remarkably lower risks of developing severe cases of COVID-19.

Some overseas regions have decided to lift all COVID-19 restrictions and coexist with the virus after majority of their population built up immunity against the disease. This was done not only through mass vaccination, but also immunity induced by natural infection, said Wu Fan, vice-dean of Fudan University's Shanghai Medical College.

However, they have paid a high price for this outcome as many people died during uncontrolled waves of the epidemic, she said.

"In China, most people have gained immunity through vaccination because we always prioritize people's safety and have prevented major, widespread outbreaks," she said. Given the distinction, Wu said China must take extra precautions in dealing with the virus.

Another approach to tackle the disease that was seen overseas is to allow the virus to circulate "at a low level" in some regions, rather than strive to stamp out new infections in the shortest possible time.

"Even though this method works in areas with sufficient medical services, it is impossible to eliminate the risk of the virus spilling over to other areas," she said.

Wu Zunyou, chief epidemiologist at the China CDC, said the zero-COVID approach does not apply to some foreign countries because successfully implementing it requires strong coordination between different departments and public support, which cannot be achieved and sustained in those nations. As a result, they resort to living with the virus and letting it spread.

"Some nations have to grapple with steep increases in new infections and deaths, and have even had to reimpose some of their previous anti-virus policies afterward," he added.