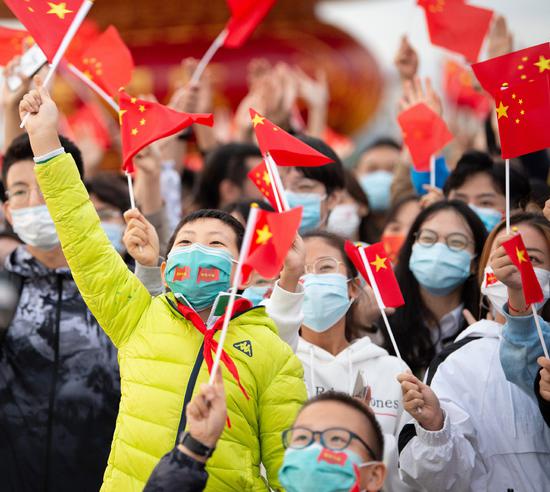 A flag-raising ceremony to celebrate the 72nd anniversary of the founding of the People's Republic of China is held at the Tian'anmen Square in Beijing, Oct 1, 2021. (Photo/Xinhua)

The Chinese government's performance in tackling COVID-19, ensuring economic growth, fighting corruption and pollution, and enhancing its own governance capacity and its quicker response to public concerns are all reasons behind a record high level of trust among Chinese citizens in the nation's government, according to a global survey and experts.

Ninety-one percent of Chinese citizens interviewed by Edelman, a top global public relations consultancy firm, said that they trust their government. The proportion is in striking comparison to the United States, where about 39 percent of respondents said that they trusted their nation's government, according to the 2022 Edelman Trust Barometer, the annual trust and credibility survey, released last week.

About 36,000 respondents from 28 countries participated in the 30-minute online interviews in November, the report said.

The report said that China was the first major economy to thrive after the COVID-19 outbreak. It was also the only major economy to see growth in 2020, with that momentum continuing throughout most of last year.

The Chinese government also made progress in other areas last year, such as the fight against pollution and its anti-corruption campaign, according to the report.

The findings are consistent with those of a 10-year survey on China by Harvard University's John F. Kennedy School of Government. This said that the Chinese people's rate of satisfaction with their government's performance has been over 90 percent for many years in a row.

"As a Chinese citizen and a civil servant, I'm not surprised at all," Foreign Ministry spokesman Zhao Lijian said on Thursday at a news conference. "The reason is that the Communist Party of China and the Chinese government actually deliver for the people.

"They put people front and center, and follow the philosophy of all for the people and by the people, including in governance and development," he said, adding that the country is also soberly aware that various risks and challenges lie ahead and it must be vigilant even in times of tranquillity.

Deborah Lehr, the CEO of Edelman, said that "success in rapidly bringing the pandemic under control created confidence with Chinese citizens" and "China has since helped vaccinate the world", which "contributed to confidence in the government".

Liu Leming, an associate professor of political science at East China University of Political Science and Law, said that the government's effective tackling of the epidemic, increasing governance capacity and quicker response to public concern resulted in people's increased trust.

The Chinese government has a strong performance legitimacy, Liu said, adding, "It emphasizes actual results and has the ability of accomplishing goals it wants to, ranging from economic development to people's livelihoods, which makes the people feel proud and increases their trust."

When problems occur, authorities at all levels in recent years can usually respond to issues within 48 hours, or even 24 hours after they occur, he said. "This has greatly increased people's trust in the government."

Liu said that in the future the government should continue to adhere to the people-centered philosophy and govern in a scientific and democratic way to maintain such a high level of trust.

The survey also found that many people are losing faith in the validity of capitalism, with about 52 percent of respondents in 27 countries saying that capitalism does more harm than good in the world.

Liu said that parties take turns in power in Western political systems, which leads to an unstable and unsustainable implementation of policies. In contrast, China has much longer-term planning and people have stable expectations about the government's policies.

"In Western-style political systems, it's difficult to reach a consensus in society. Instead of doing practical things, the politicians are often quarreling and the public knows it is a political show," he said.

When a political party comes to power, it tends to favor certain interest groups and is unable to introduce fair policies, resulting in social inequality, especially the gap between rich and poor, he added.

Liu said that the poor government performance in Western nations, especially the weak response to the pandemic and the economic slowdown, is contributing to people's growing distrust.