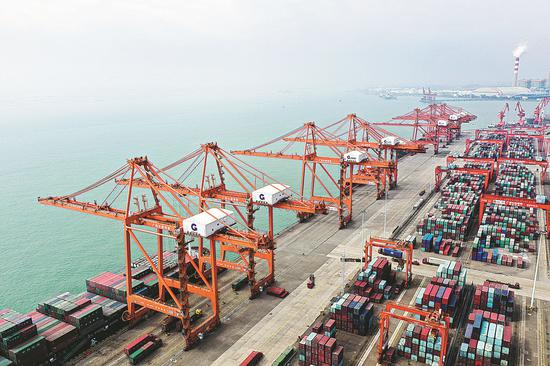 They made the remarks at the RCEP Media & Think Tank Roundtable Forum with the theme of "The RCEP comes into effect: New prospects for regional cooperation and development".

The forum was jointly organized by the Publicity Department of the Communist Party of China Hainan Provincial Committee, China Daily, the Hainan-based China Institute for Reform and Development and the Hainan Institute for Free Trade Port Studies.

The agreement came into force on Jan 1 in 10 of the 15 RCEP member states. The world's biggest trade pact, it covers one third of the global population and domestic gross product and will add more resilience to regional industrial and supply chains, the experts said.

While speaking at the opening ceremony of the event, Zhou Shuchun, publisher and editor-in-chief of China Daily, said a unified regional market will unleash the huge potential of trade growth in the region. It will also vigorously promote regional economic integration of a higher quality and at a deeper level, and strengthen the presence of the Asia-Pacific region in the global economic and trade arena, he added.

The trade pact's implementation is a testimony to true multilateralism and free trade, which also indicates a future of mutually beneficial cooperation with opening-up practices and win-win outcomes, Zhou said.

"Removing wall-like barriers instead of building more is the trend of history, and it is in line with interests of people in the world to firmly support a multilateral trading system," he said.

The free trade agreement was signed by 15 Asia-Pacific countries, including all 10 member states of the Association of Southeast Asian Nations, in November 2020. It came into effect in China, Japan, Australia, New Zealand and six ASEAN states－Brunei, Cambodia, Laos, Singapore, Thailand and Vietnam－at the start of the year and will be implemented in South Korea on Feb 1.

With provisions on liberalization and facilitation in both trade and investment, it is widely expected the pact will provide an all-around boost to regional economic growth and global free trade.

Hong Nanwei, general manager of Fujian Chuangxing Ocean Sci-Tech Co, a frozen seafood processor and exporter in Quanzhou, Fujian province, said thanks to reductions and removals of tariffs in the pact, the company is more confident of better growth in overseas markets.

Chi Fulin, president of the China Institute for Reform and Development, said tariffs on about 90 percent of goods traded within the region will eventually be eliminated and significantly reduce trade costs and product prices.

The cumulative rules of origin, which allow products to have just 40 percent of their value added within the region to enjoy tariff reduction or elimination, will encourage enterprises to source from the region. That will then promote the formation of a closer, more stable and more competitive regional industrial cooperation system, according to Chi, who is also president of the Hainan Institute for Free Trade Port Studies.

Citing a study by the Asian Development Bank, Bert Hofman, director of the East Asian Institute at the National University of Singapore, said the pact will increase member economies' income by over half a percent by 2030, adding some $245 billion in annual income and 2.8 million jobs in regional employment.

Chi suggested member economies strengthen efforts to accelerate alignment of market regulations and share and recognize customs clearance information to accelerate the formation of a united regional market. Efforts are also needed to advance the construction of integrated markets in key areas such as agricultural products, services and the digital economy, he said.

Ong Tee Keat, president of the Center for New Inclusive Asia in Malaysia, and also Malaysia's former minister of transport, said the regional free trade deal can serve as a building block for multilateralism in the future.