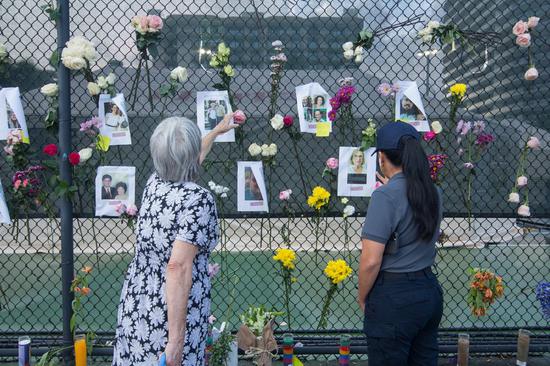 People view a makeshift memorial near the site of the residential building collapse in Miami-Dade County, Florida, the United States, on June 26, 2021. (Photo by Monica McGivern/Xinhua)

The tenth victim in the collapse of a condo in Surfside, Florida has been confirmed, officials said Monday as rescue mission was ongoing.

Miami-Dade Assistant Fire and Rescue Chief Raide Jadallah said during a news conference earlier in the day that another victim "was processed, removed from the pile, and the operation continued," bringing the death toll in the tragedy to 10.

As of Monday, 151 are unaccounted for and 135 are accounted for in the collapse of Champlain Towers South, Miami-Dade County Mayor Daniella Levine Cava said during the news conference.