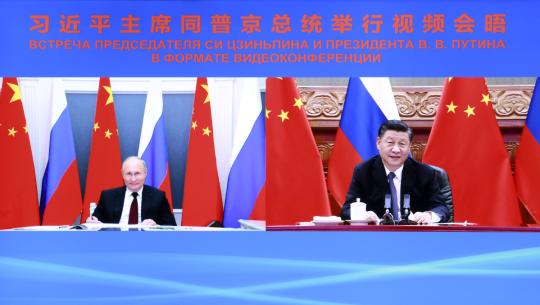 Beijing and Moscow agreed on Monday to extend the China-Russia Treaty of Good-Neighborliness and Friendly Cooperation to boost the high-level development of bilateral ties, and they also pledged to jointly uphold real multilateralism and safeguard global strategic security and stability.

President Xi Jinping and his Russian counterpart Vladimir Putin announced the extension of the treaty, which was signed by the two countries 20 years ago, in a joint statement in their talks via video link. The treaty has laid a solid legal foundation for the long-term and healthy development of China-Russia relations.

During the online talks, Xi said the concept of the friendship for generations established by the treaty conforms to the fundamental interests of the two countries as well as the theme of the times to promote peace and development. It is also a vivid practice of building the new type of international relations and a community with a shared future for mankind, Xi added.

Today's China-Russia ties are "mature, stable and solid" and can withstand the test of changes in the international landscape, he said, adding that the two countries support each other on issues related to their respective core interests with effective strategic coordination, and have safeguarded their shared interests.

As the world enters a period of turbulent change and human development encounters multiple crises, Xi said close cooperation between China and Russia has provided positive energy to the international community, and has set an example for a new type of international relations.

China is confident that guided by the spirit of the treaty, the two neighboring countries will remain focused on developing bilateral ties regardless of possible challenges, he said, adding that the country firmly supports Russia in taking strong measures to safeguard its long-lasting peace and security.

Putin extended congratulations to Xi, who is also general secretary of the Communist Party of China Central Committee, on the 100th anniversary of the CPC's founding on July 1, and expressed his hope that China, under the leadership of the CPC, could make new achievements in socioeconomic development and play a more important role in international affairs.

The Russian president said his country is satisfied with the unprecedented high-level development of bilateral relations as well as the nations' all-around, steady bilateral cooperation. The extension of the treaty will lay an even stronger foundation for the long-term development of Russia-China relations, he added.

Moscow stands ready to work with Beijing to strengthen strategic mutual trust, develop even closer strategic coordination, continue to support each other's efforts to safeguard their respective national sovereignty and territorial integrity and respect each other's system and development path of their own choice, Putin said.

Both countries emphasized the need to jointly uphold the international system with the United Nations at the core as well as the international order underpinned by international law, according to a news release issued after the talks. They also pledged to oppose external interference in domestic affairs under the guise of "democracy" and "human rights", as well as unilateral sanctions.

The two countries agreed to jointly promote peace, development, fairness, justice, democracy and freedom, intensify solidarity and coordination to cope with common challenges, and advance the building of a community with a shared future for mankind.

They stressed jointly opposing stigmatizing and politicizing the COVID-19 pandemic and virus origin tracing, and pledged to strengthen vaccine cooperation, maintain close high-level exchanges, expand bilateral trade and advance the synergy of the Belt and Road Initiative with the Eurasian Economic Union.

The two countries also vowed to work together to oppose politicizing sports, and Moscow supports Beijing in hosting successful Winter Olympic Games in 2022.

While underlining the need to comprehensively plan and promote the development of the Shanghai Cooperation Organization, they also expressed concerns over the security situation in Afghanistan caused by the United States' speedy withdrawal of its troops from the country, and stressed the need to jointly uphold regional peace, security and stability.