11 miners rescued from east China gold mine after 14 days 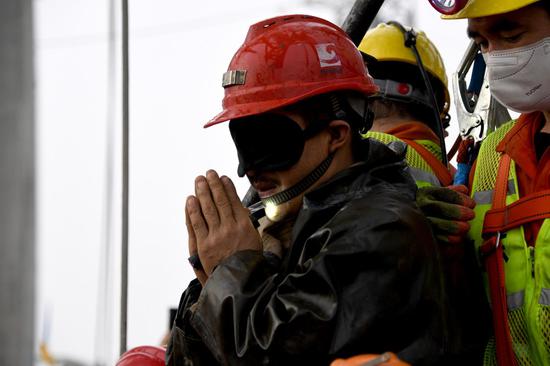 A trapped miner expresses his gratitude after being lifted from a gold mine in Qixia City, east China's Shandong Province, on Jan. 24, 2021. (Xinhua/Chen Hao)

Eleven miners were rescued on Sunday after being trapped underground for two weeks due to a blast in a gold mine in east China's Shandong Province.

Rescuers lifted two workers at around 3:18 p.m., bringing the number of rescued workers to 11. People on the ground greeted the miners with loud applause.

One of the rescued workers put his palms together in a show of gratitude to the applauding people.

The first rescued miner was lifted from the mine at 11:13 a.m. Sunday. The worker, said to be in extremely weak condition, was rushed to a hospital for treatment.

"For days we took turns to clear the debris in the shaft. Today, we finally got the result we had hoped for," said one of the rescuers.

Experts said the rescue of the 11 miners on Sunday was beyond their expectations, as only three days ago they had estimated that it would take rescuers at least 15 days to dig through the block to reach the trapped workers.

In the early hours of Sunday, after clearing small pieces of debris, rescuers found an empty space down under that was only blocked by large pieces, said Xiao Wenru, chief engineer of the mine rescue center of the Ministry of Emergency Management. "The discovery greatly expedited the rescue process."

Twenty-two miners were trapped underground due to the mine blast on Jan. 10 in Qixia, under the city of Yantai, Shandong Province.

Before Sunday, rescuers had established contact with only 10 of the miners, who are in good physical and psychological conditions. Another is believed to have been dead.

Rescuers are still racing against the clock to dig into the blocked mine shaft to save the remaining 10 miners who are unaccounted for.