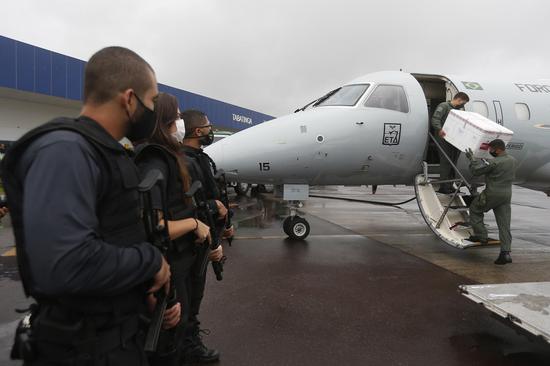 Staff members carry the Chinese vaccine in the city of Tabatinga in the state of Amazonas, Brazil, Jan. 19, 2021. (Photo by Lucio Tavora/Xinhua)

China will offer aid to the Brazilian state of Amazonas to help overcome the serious health crisis caused by the lack of oxygen in hospitals to treat patients with COVID-19, Chinese Ambassador to Brazil Yang Wanming said.

In a video conference on Friday with the governor of Amazonas Wilson Lima, Yang said China will donate oxygen, oxygen generators, masks and other health supplies as well as food to the state.

The Chinese ambassador expressed China's empathy regarding the crisis in Amazonas, where a few days ago, a more contagious strain of COVID-19 was discovered, which experts say has contributed to the collapse of the region's health system.

It was also reported that the Red Cross Society of China will provide emergency assistance to Amazonas in the near future.

The provincial government of Guangdong and Chinese companies such as XCMG, Huawei, BYD, Gree, and the Bank of China, as well as other Chinese enterprises in Brazil and the Brazil-China Sociocultural Institute will donate 4,300 kg of oxygen, 25 oxygen generators, 360,000 masks and other supplies to Amazonas.

For his part, Lima thanked for the help offered by China and said the Asian country is an important partner of Brazil.

According to the governor, the state of Amazonas is willing to further strengthen cooperation with China in the fight against COVID-19, to strengthen economic and trade cooperation in the post-pandemic era, to promote local economic recovery and to work towards benefitting both peoples.

With all the hospitals in the state capital of Manaus at nearly full capacity, the region has been faced with a shortage of oxygen in hospitals for the treatment of patients with COVID-19, which resulted in several deaths.

According to the Brazilian Health Ministry, Amazonas has registered 248,561 cases and 7,051 deaths from the virus so far.