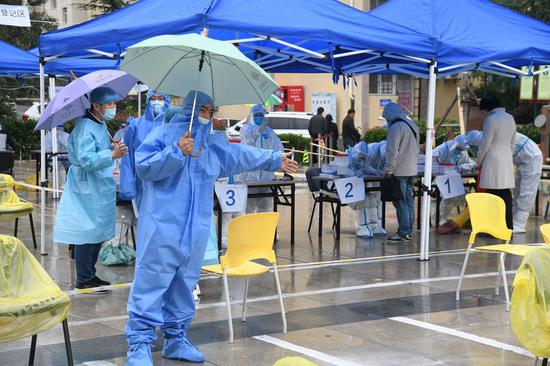 Authorities in the city of Qingdao decided to downgrade the Loushanhou Community, where clusters of COVID-19 infections were discovered between late September and mid-October, from a medium-risk region to low-risk for COVID-19 on Monday.

The community has seen no new confirmed locally-transmitted COVID-19 cases for 14 consecutive days, which meets the criteria to lower its response level, according to the headquarters in charge of epidemic prevention under the Qingdao municipal committee of the Communist Party of China.

The city, in east China's Shandong Province, soon designated the Loushanhou Community, where the Qingdao Chest Hospital is located, as a medium-risk area after the discovery of new infections.

A total of 13 confirmed COVID-19 cases were reported in this new wave of infections, three of which have been discharged from the hospital after recovery.