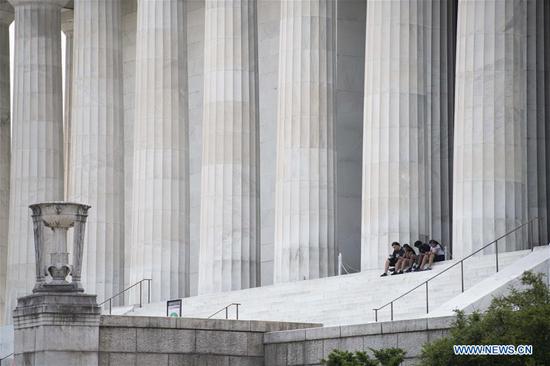 People sit on the steps of the Lincoln Memorial in Washington, D.C., the United States, on June 22, 2020. U.S. COVID-19 deaths surpassed 120,000 on Monday with nearly 2.3 million infections, while new cases continue to increase across the country over three months into the pandemic. (Xinhua/Liu Jie)

U.S. COVID-19 deaths surpassed 120,000 on Monday with nearly 2.3 million infections, while new cases continue to increase across the country over three months into the pandemic.

Worldwide, COVID-19 cases topped surpassed 9 million and the death toll from the virus was 469,122.

In the United States, the virus spread has trended downward in some of the hard-hit places including New York City, once the epicenter of the U.S. COVID-19 outbreak.

The Big Apple entered phase two of reopening on Monday, during which hair salons, real estate sales, vehicle sales and rentals, some in-store retails are allowed to reopen. Restaurants can serve customers in outdoor space, according to New York state's phased reopening strategy.

However, several U.S. states in the South and Southwest are seeing upticks in their coronavirus case counts.

As of Sunday, the nation's seven-day average of new COVID-19 cases increased more than 24 percent compared with a week ago, according to a CNBC analysis of JHU data. Cases were growing by 5 percent or more in 25 states across the United States, including Arizona, Texas, Florida and Oklahoma.

According to a CNBC analysis of data compiled by the COVID Tracking Project, hospitalizations from COVID-19 were growing in 14 states as of Sunday.

"We're seeing a resurgence in the south and the southeast, they really never got rid of their epidemics," Scott Gottlieb, former commissioner for the Food and Drug Administration, told CBS News "Face the Nation" on Sunday.

Calling the situation "very unsatisfactory," Jeffrey Sachs, a renowned economics professor at Columbia University, recently told Xinhua that as the virus continues to spread rapidly, the federal government has "basically lost interest" in controlling the virus.

"The results are likely to be very bad: a big resurgence of disease and deaths," said Sachs, also a senior United Nations advisor.

Public health experts believe that states' hasty efforts to reopen their economies, weeks of nationwide protests over the death of unarmed black man George Floyd, as well as some Americans' unwillingness to practice social distancing or wear a mask, have all contributed to the recent surge in cases.

Since late April, U.S. states, facing record unemployment, have gradually started to reopen their economies, despite not seeing a significant downward trend in COVID-19 infections and hospitalizations.

An influential model produced by the Institute for Health Metrics and Evaluation (IHME) at the University of Washington recently revised its projections, forecasting nearly 170,000 COVID-19 deaths in the United States by Oct. 1.

World Health Organization (WHO) Director-General Tedros Adhanom Ghebreyesus on Friday warned that the world has moved into a "new and dangerous phase" of the global coronavirus pandemic as countries have lifted lockdowns and other measures intended to curb the virus' spread, and several have seen their rates of newly reported cases of the virus accelerate.

"Countries are understandably eager to open up their societies and their economies. But the virus is still spreading fast. It is still deadly and most people are still susceptible," he said.