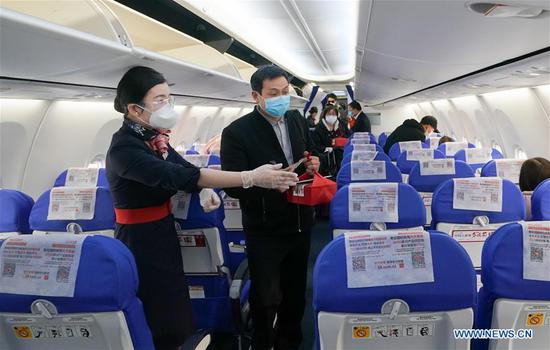 The airport in Wuhan has resumed flights to and from 45 domestic cities since April 8 when travel restrictions placed on the epicenter of the novel coronavirus outbreak were lifted, said Sun Shaohua, deputy director of the CAAC operation monitoring center.

Up to April 14, there had been 799 flights operated by 19 airlines to and from Wuhan, transporting 40,600 passengers, Sun said.

Key airport projects were proceeding smoothly in Hubei Province. As of March 25, four key airport projects in Ezhou, Jingzhou, Yichang and Xiangyang cities had resumed construction. All workers for the projects returned to work earlier this month, Sun said.

According to the Civil Aviation Administration of China (CAAC), the daily number of incoming passengers through airports across China has stabilized at 2,000 to 3,000 over the past two weeks, as there were no more than 20 inbound flights each day during that period.