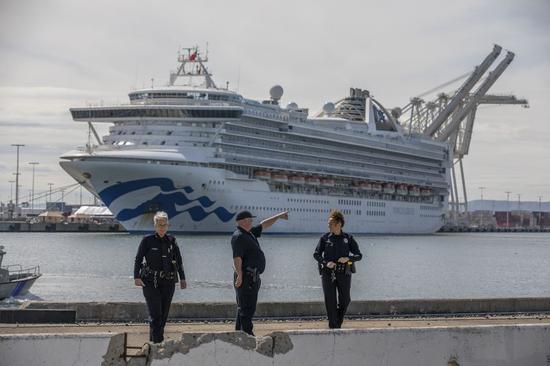 Cruise ships carrying passengers infected with the novel coronavirus are ordered to stay off U.S. shores "indefinitely" and prepare to give the sickened medical care aboard the vessels, according to a memo issued Sunday by the U.S. Coast Guard.

Cruise ships carrying passengers infected with the novel coronavirus are ordered to stay off U.S. shores "indefinitely" and prepare to give the sickened medical care aboard the vessels, according to a memo issued Sunday by the U.S. Coast Guard.

The Marine Safety Information Bulletin said all ships operating in U.S. waters "with more than 50 persons on board should increase their medical capabilities, personnel and equipment in order to care for people who contracted COVID-19 or other influenza-like illness for an indefinite period of time.

For foreign-flagged ships "that loiter beyond U.S. territorial seas," the mandate dictates that they should evacuate the passengers through -- and seek support from -- their countries of origin "prior to seeking support from the limited facilities in the U.S."

In addition, vessels within U.S. territorial seas "should report the number and condition of any and all ill persons on board" on a daily basis, according to the memo signed by Coast Guard Rear Admiral Eric Jones, whose district covers Florida, Georgia, South Carolina and Puerto Rico.

Vessels or masters that "do not immediately report illness or death among on board personnel" could face civil penalties or criminal prosecution, the memo said.

Officials at federal, state and local levels have been debating whether to let the cruise ships dock at U.S. shores, especially the Zaandam and Rotterdam -- two vessels owned by Holland America.

There are more than 300 U.S. nationals on board the two ships. Two of four deaths are believed to be caused by COVID-19, nine people have tested positive for the virus and at least 190 more have reported symptoms, local media cited the company as saying.

Florida Governor Ron DeSantis said Tuesday that the state's healthcare system is too overwhelmed to handle patients aboard the Zaandam. "Just to drop people off at the place where we're having the highest number of cases right now just doesn't make a whole lot of sense," he said.

President Donald Trump said later that people are "dying on the ship," vowing to do "what's right. Not only for us, but for humanity."