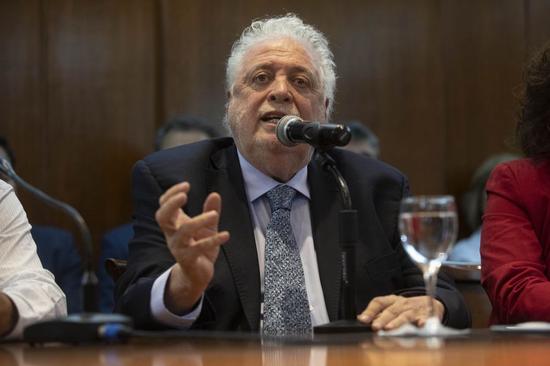 Argentina and Chile on Tuesday each reported their first confirmed case of COVID-19, as countries in Latin America took steps to curb potential outbreaks.

Both patients had recently returned to South America from trips abroad.

Chilean President Sebastian Pinera allayed fears of a widespread epidemic, saying his country has put in place all of the recommendations made by the World Health Organization (WHO) to head off an outbreak.

"I want to deliver a message of tranquility to all of my compatriots," said Pinera, adding he had spoken earlier with WHO Director-General Tedros Adhanom Ghebreyesus and Pan American Health Organization Director Carissa Etienne.

They have learned in detail the way in which Chile has faced this situation and they see Chile a true model for other countries, said Pinera.

Argentine President Alberto Fernandez called on the population to be alert, but not alarmed by the emergence of the coronavirus.

"We should not be alarmed, though we should be attentive," Fernandez told local media, following the announcement of the country's first case.

In Ecuador's capital Quito, local authorities launched the process of disinfecting public transit systems used by some 650,000 passengers a day, including transportation units and stations.

Ecuador has so far reported seven cases of the coronavirus.

Chile's first COVID-19 patient is a 33-year-old man who recently traveled extensively through Asia and returned via Europe, according to the country's National Institute of Public Health.

The patient spent almost a month visiting Singapore, Malaysia, Indonesia and the Maldives before traveling to Spain for his return trip to Chile on Feb. 25.

By March 1, he began to have respiratory symptoms. After being tested for COVID-19, he was quarantined for treatment.

Argentina's first case involves a man, 43, who returned to the capital city of Buenos Aires on Sunday from Italy.

"The man was in several places in Europe, but mainly in Italy, in the north," Argentine Health Minister Gines Gonzalez told reporters at a press conference.

The patient told healthcare workers that he lived alone and did not attend social events, so the chances of having infected others were low.