Panda mother returns to center after mating in wild 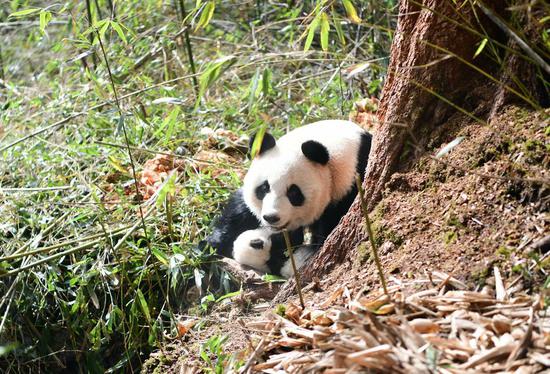 Giant panda Qiao Qiao and its cub in Wolong National Nature Reserve in southwest China's Sichuan Province, Dec. 12, 2019. A giant panda mother raised in captivity was brought back to the conservation center Thursday after mating with a wild panda and giving birth to twins in southwest China.

A giant panda mother raised in captivity was brought back to the conservation center Thursday after mating with a wild panda and giving birth to twins in southwest China.

Panda Qiao Qiao and one of her cubs were doing fine after returning to the China Conservation and Research Center for the Giant Panda in Wolong National Nature Reserve, Sichuan Province, their keepers said.

The other twin cub was returned to captivity earlier as panda mothers usually refuse to care for both twins.

The center's staff said they first lured Qiao Qiao into a cage with bamboo shoots and other food. Then staff wearing coats with the smell of the panda mother captured the cub. The "capture" lasted about five hours.

Wu Daifu, head of the center's Hetaoping base, said they retrieved the mother and son to protect them against the harsh winter, especially as the cub can roam freely after just four months.

Wu also said Qiao Qiao, who is young, healthy and experienced in cub rearing, will continue to participate in the reintroduction project next year.

China initiated a panda reintroduction program to increase the genetic diversity of captive pandas in 2017. Qiao Qiao, 10, was released into the wild in March and gave birth to a pair of male twins on Sept. 16 after a successful mating with a wild panda in April.

The number of captive pandas was 548 globally as of November last year. Fewer than 2,000 pandas live in the wild, mostly in the provinces of Sichuan and Shaanxi.