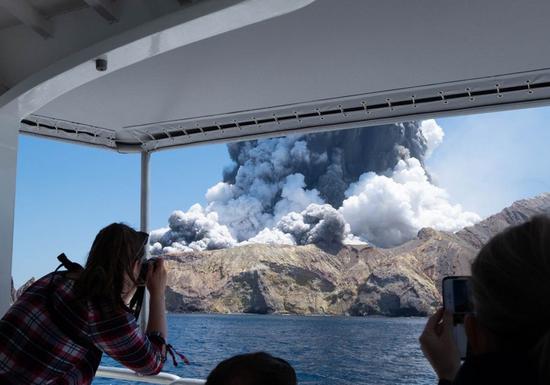 Wu conveyed condolences to the injured on behalf of the Chinese government. She reiterated that the embassy will try its best to handle the emergency response and consulate protection, and to coordinate with the New Zealand authority, so that the Chinese citizens are timely and effectively treated.

Wu encouraged the injured to cooperate positively with the local medical staff during the treatment and wished them an early recovery.

The injured Chinese visitor expressed gratitude to the motherland and the consular staff for the visiting.

The other injured Chinese was hospitalized in another hospital and was also visited by Chinese diplomats in New Zealand.

Ashley Bloomfield, director general of the New Zealand Ministry of Health, said at a press conference on Wednesday that the national multiple complex burn action plan had been activated Wednesday. Many of the injured tourists are known to have more than 30 percent of body burnt.

The volcanic eruption on White Island has already caused six deaths and eight missing, with thirty people being treated in seven hospitals across New Zealand. Twenty-five of the injured are in critical condition, said the Police on Wednesday morning.

Forty-seven people were on White Island at the time of the eruption.

The two Chinese nationals were among those injured in the volcanic eruption on White Island in the Eastern Bay of Plenty of New Zealand's North Island, according to the Chinese Embassy in New Zealand.

White Island is a famous tourist attraction in New Zealand. People can explore the volcanic island by boat or by helicopter. If safety conditions permit, visitors can even enter the main volcano crater.