Chile extends state of emergency due to protests 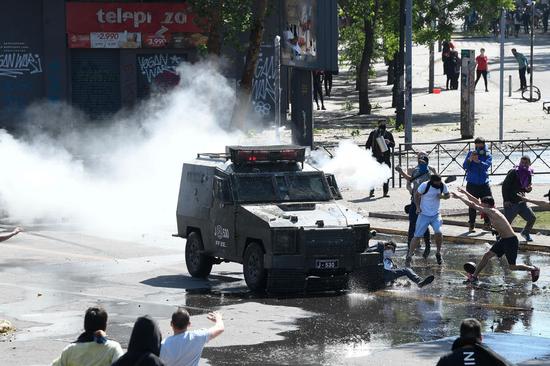 People participate during a demonstration against public transit fare hikes in Santiago, capital of Chile, on October 20, 2019. (Xinhua/Jorge Villegas)

Chile on Sunday extended a state of emergency to regions swept by violent protests, which caused at least three deaths and 716 arrests, authorities said.

Chilean President Sebastian Pinera on Friday declared a state of emergency in Santiago, as protesters set metro stations on fire.

According to a government report, two women died on Saturday when a supermarket was sacked and set on fire in the San Bernardo district of Santiago. The third victim died hours later with no details provided.

Also, two protesters were shot by soldiers at a military checkpoint and are reportedly in serious condition.

Another 15 civilians and 61 police officers have been injured nationwide in the demonstrations.

Fires and damage were reported at scores of metro stations in Santiago, and several schools suspended classes for Monday. People were lined up in front of gas stations to have their tanks filled up for the coming work week.

Chilean Minister of National Defense Javier Iturriaga said on Saturday that "there is a lot of work to do" before Monday so that "everyone can return to work and continue with their normal lives."

In the wake of the violence, Pinera announced late Saturday the "suspension" of the fare hike, according to the daily El Mercurio.