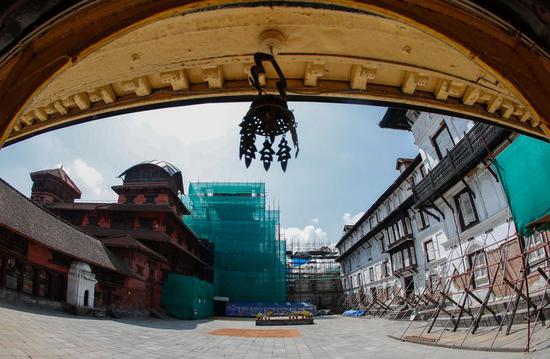 Photo taken on Oct. 9, 2019 shows the restoration site of the nine-storeyed Basantapur complex in at the Durbar Square in Kathmandu, Nepal. (Xinhua/Wang Jingqiang)

Forming thousands of jigsaw pieces into a picture might be a headache for many, but what Chinese restorer Zhou Jianguo and his team face in Nepal is far more challenging -- numerous pieces of debris from a world cultural heritage site that was damaged in a 7.9-magnitude earthquake.

The devastating earthquake jolted Kathmandu Valley in 2015, the heart of Nepal's world cultural heritage sites, causing great damage to the historical building complexes, including the finest temples and towers in the renowned Kathmandu Durbar Square.

The veteran Chinese team dispatched to Nepal in 2017 is closely working with their Nepali colleagues, trying to recover the body and soul of the world heritage site around the clock.

The Kathmandu Durbar Square, an ancient royal courtyard built in the 17th and 18th centuries, was inscribed in the United Nations Educational, Scientific and Cultural Organization (UNESCO)'s World Cultural Heritage List in 1979.

The square consists of several royal palaces and temples, among which the nine-storeyed Basantapur temple complex is of top historical and artistic value.

The earthquake caused serious damage to the nine-storeyed Basantapur complex, including the top three floors of the Basantapur Tower in the southwest corner of the complex and parts on the sixth floor of the Bhaktapur Tower in the northeast corner of the complex. Some 80 percent of the walls suffered varying degrees of deformation and cracking due to the tremors, and numerous wooden components were damaged and scattered.

After the earthquake, at the request of the Nepali government, the Chinese government shouldered the project in 2017 to restore the complex. Zhou and his team with expertise in restoring historical Tibetan buildings from the Chinese Academy of Cultural Heritage (CACH) thereupon arrived in Kathmandu.

Zhou is the technical chief of the Chinese restoration team. He recalled the scenario of the complex after the earthquake. "It has been two years that we have been here ... The only protection of the heritage was the plastic sheet covering the complex." 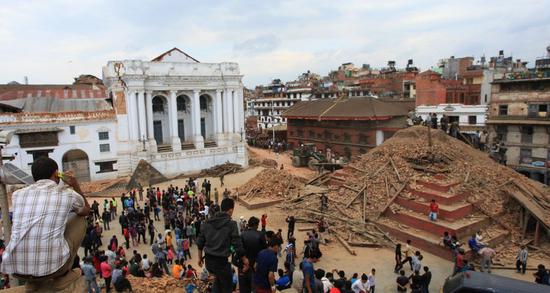 Temples on Hanumandhoka Durbar Square are ruined after an earthquake in Kathmandu, capital of Nepal, on April 25, 2015. (photo by Sunil Sharma/Xinhua)

"The entire heritage was seriously damaged ... and we have to take immediate precautionary measures to stabilize the buildings to keep them from secondary damage," Zhou said.

It took them almost half a year to eliminate potential risks in the crippled complex. "And then we started to collect the wooden structures and sculptures in the debris," said Zhou.

Due to chaos after the quake and the density of the historical buildings, the collection work also posed a great challenge for the Chinese team, as some fallen sculptures were taken away by locals and some had been wrongly collected as parts of other buildings.

Zhou and his colleagues numbered the collected structures and sculptures and managed to rebuild the collapsed storeys with the original pieces in another place, according to limited references provided by the Nepali side and local religious customs. If the rebuilding is successful, they will dismantle the "lego," transfer them to the square and construct the storeys on the relics.

"For the Nepali workers, they have seldom handled such huge structures before. We have to instruct them right on the spot," said Chinese restorer Xiong Jianglao.

"We sometimes need to try more than 20 times to find the correct angle to fix the structure. Only when every connection is accurate, can the collapsed storey be rebuilt authentically," Xiong said.

After more than two years of tedious and challenging work, three of the four damaged towers of the temple have been reconstructed, with the last one being underway.