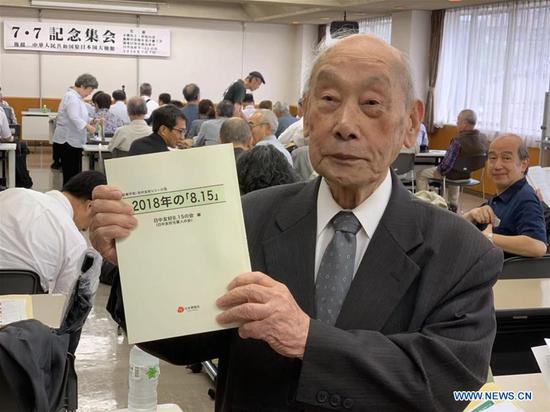 Nobuo Okimatsu, a 94-year-old member of "Japan-China Friendship August 15 Association," shows a monthly magazine called "August 15," the day of Japan's unconditional surrender in 1945, during a rally in Saitama, Japan, on July 7, 2019. Japanese civil groups held the rally on Sunday to commemorate the 82nd anniversary of the "July 7th Incident," calling on people not to forget history, oppose the war and enhance the friendship between Japan and China. (Xinhua/Guo Dan)

Japanese civil groups held a rally on Sunday to commemorate the 82nd anniversary of the "July 7th Incident," calling on people not to forget history, oppose the war and enhance the friendship between Japan and China.

It was 82 years ago, on July 7, 1937, that Japanese soldiers attacked Chinese forces at the Lugou Bridge, also known as the Marco Polo Bridge, marking the beginning of Japan's full-scale invasion of China and eight-year atrocities perpetrated by Japanese army on Chinese civilians.

The rally was held in Saitama Prefecture, not far from the capital of Tokyo. Organizers, including "Japan-China Friendship August 15 Association" and other groups, have held the rally every year for 30 years.

"Now, the only member of our group who has actually lived through the war is 97-year-old Tomohiro Taniguchi," Kunio Takano, one of the organizers, said in a speech.

Nobuo Okimatsu, a 94-year-old member of "Japan-China Friendship August 15 Association," told reporters, "Although I have not been to China, I have been studying the history of the war." He showed a monthly magazine called "August 15," the day of Japan's unconditional surrender in 1945.

President of the Kanto Japan-China Peace and Friendship Association Hisao Shintaku said that only about 20 percent of Japanese people know the truth about the history of Japan's war of aggression against China.

"We must think hard about how to pass on the truth of history to the next generation," he said.

Yang Yu, minister-counselor of the Chinese embassy in Japan, said that the basis of friendly exchanges between China and Japan lies in the people. China and Japan are neighbors. History fully proves that the two countries "benefit from peace and lose from confrontation."

The healthy and stable development of bilateral relations not only serves the interests of the two peoples, but also contributes to peace, stability, prosperity and development of northeast Asia and the world at large, he added.

Uri Imura, a mother with her two children was among the participants. She had been studying in China. The experience of studying abroad made her realize the differences between her Chinese classmates and herself on historical issues and the importance of understanding the real history.

As to why she brought her children to the rally in the rain, she said, "When they grow up, they may have little chance to learn about real history other than textbooks. So it's very important to pass on from parent to children and to grandchildren. I want my children to live in peace."