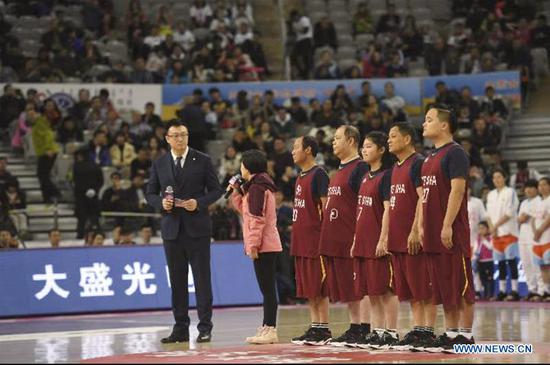 A thump. Another thump. And another one. The sounds reverberated through an empty stadium in Inner Mongolia. Sunlight poured in through the windows, illuminating the court and the surrounding green walls.

Liu Fu clumsily bounced a basketball, held it up, tried to shoot for the hoop and missed.

Liu didn't know how to play basketball. His thick, rough hands were more used to holding a drill than a ball. However, the former migrant worker would stand in front of hundreds of thousands of people and display his awkward basketball skills in the Chinese women's league All-Star Game on January 27, 2019, in memory of a basketball-loving boy whom he had never met but who now was already a part of his life, literally.

Liu's memory often flashed back to the night of April 27, 2017, when he lay in the surgery room of the Second Xiangya Hospital in Hunan Province waiting for an organ transplant. Out of the corner of his eye, he saw someone come into the room, carrying a box.

"They are of excellent quality," were the last words Liu heard before he lost consciousness, according to a story released by the Beijing News.

In the box were the lungs of a 16-year-old boy, Yesha, who had died early that morning.

In retrospect, April 27 was an ordinary day for most people in the world, yet on this very day a lot of people saw their fates forever changed - among them, a lively boy whose life stopped at 16, two devastated parents and seven patients, some of whom were terminally ill.

Just a day before, Yesha was a happy high school freshman whose favorite pastime was playing basketball.

One widely circulated picture online recorded the precious moment when Yesha, in a black sweater and dark blue school uniform pants, was playing basketball with his schoolmates in the schoolyard. He was inside the arc, facing the boy who had just successfully grabbed a rebound. Yesha was observing the boy's movements, his right foot stepping up and it seemed he was about to act the next second.

Yesha seemed to have everything. Besides being athletic, he was also an academic star at his high school in Changsha, winning the top award at his school's mathematics competition and was considered a model student. Standing 180cm tall, he had the best features of both his parents; slightly curly hair and thick eyebrows from his father, and lips from his mother. He could well have fit the role of Prince Charming in a school play.

"Both my wife and I are plain-looking people and it was strange that my son was so handsome, several times more handsome than me," Yesha's father Papa Ye said, a smile breaking out on his face.

No one can imagine that death would soon seize the industrious and high-spirited student. Two years on, Papa Ye can still clearly remember the painful scene that unfolded on April 26, 2017.

On that day, Yesha called his father from school, saying that he had a terrible headache.

In an interview with the Beijing News, Papa Ye recalled his last conversation with his son at noon that day.

"I told him to go home first. I should have let him go to the teacher for help! If only he went to the hospital instead of coming back home, none of this would have happened," he said.

Papa Ye hurried home. When he opened the door, he found his son lying unconscious on the floor.

"I called his name over and over again, but there was no reply," he said ruefully, his face hidden behind cigarette smoke.

Papa Ye rushed Yesha to the Brain Hospital of Hunan Province, a 10-minute drive from his home, but it was too late.

Doctors exhausted all possible means of emergency treatment on Yesha and the diagnosis was dire -- severe intracranial hemorrhage, weak breath, deep coma and no reaction to outside stimulation. Yesha's parents were told to prepare for the worst.

"I didn't want to think of the worst case scenario but to tell you the truth, there was a little voice in my mind that told me 'it could happen'," Papa Ye said, clearing his throat.

Yet the worst moment came at 7:20 the following morning. Yesha was pronounced brain-dead less than three weeks before his 16th birthday.

At around the same time, organ donation coordinator Meng Fengyu received a call from the Brain Hospital telling her there may be a potential organ donor.

Meng, then 26, raced to the ICU ward and saw doctors speaking to Yesha's parents.

"They were listening to the doctors attentively and asking the occasional question," Meng recalled.

Doctors explained Yesha's irreversible situation and mentioned the possibility of organ donation, considering that Yesha was young and healthy and his organs were in perfect condition. Naturally, the recommendation was met with a resolute and desperate "No" from Yesha's mother.

Hearing this, Meng backed away. She did not even walk into the room because she understood how heartbroken the parents were at that time - Yesha was their only child, and he was such a brilliant boy.

"I think the most painful thing in the world is losing your child. I didn't have the heart to persuade them, as Mama Ye was already strongly against the proposal," said Meng.

Meng left the ICU ward. While she was walking out of the door, Papa Ye was desperately questioning his friend, also a doctor, for other solutions.

"Isn't there any other way? Really? No other way?" Papa Ye asked his friend in despair.

Meng understood their previous refusal. In a country with several thousand years of history, the idea of cremating a family member's body which is not "complete" is still not acceptable for many Chinese, especially older generations.

As the ancient philosopher Confucius put it over 2,500 years ago, people's bodies - including every hair and piece of skin - come from their parents, and they must not be injured or wounded. This was considered the beginning of filial piety, a central value in traditional Chinese culture.

Consequently, when China started a voluntary organ donation trial in 2010, only just over 1,000 people registered.

However, Meng was very surprised to find that less than half an hour after she had left the hospital, another call came in, this time from the Hunan Red Cross telling her the parents of a 16-year-old brain-dead boy wanted to learn more about organ donation.

"I was astonished," Meng said. "Wasn't this call about Yesha's parents? What happened in the past half an hour that made them totally change their minds?"

Fast-forward two years, and when asked about the reason for their change of heart, Papa Ye said that in that half hour, he absorbed the fact that his son would never return, and he was determined to realize his dream for him.

"His dream was to become a doctor, to save lives," he said.

"He ticked in the checkbox in order - the corneas, the heart, the liver, the kidneys. He was fast and determined," Meng recalled.

Once he had almost finished filling out the form, Papa Ye checked himself at the choice of "Lungs".

"Shouldn't we leave at least one organ to our child?" he said to himself.

However, his hesitation was soon erased when doctors told him a terminal pneumoconiosis patient would rely on his decision for the chance of life.

"I wanted to leave an organ to my son. But his lungs can save a life, so I decided to donate them as well," Papa Ye said.

"Looking back, I believe I did the right thing," he continued, clearing his throat again. "At least he left something behind in the world. Our hearts are not completely empty.

"The biggest regret is that we did not donate more. I later learned that his organs could have saved up to 11 people," Papa Ye said.

"Un...unlike people who die in car crashes," he suddenly stuttered, "His, his organs were in great condition."

"Just so you know, my boy's lungs were the best! One day he came back from school and said to me, 'Daddy, Daddy, do you know that I won first prize at school today?'"

"'My vital capacity is the largest in my grade!' he said. His vital capacity was the best among 400 students in his grade," Papa Ye said, his face lighting up with rare laughter.

When Liu regained consciousness the next day, he immediately knew that the surgery was successful. In almost 20 years, he had never breathed so comfortably.

"I still wore an oxygen mask but I knew it was successful, because I could breathe on my own. The suffocating feeling disappeared and I could breathe smoothly," he said.

Before the surgery, Liu was very calm. If the transplant surgery worked, it would be a rebirth for the then-47-year-old. If it didn't, Liu saw it as an eventual relief. But there was a lingering hope in his heart that he could be cured.

For 20 years, Liu could not work, and in the last couple of years before his surgery, he could barely breathe; his rotten lungs tortured him so much that he felt like the living dead.