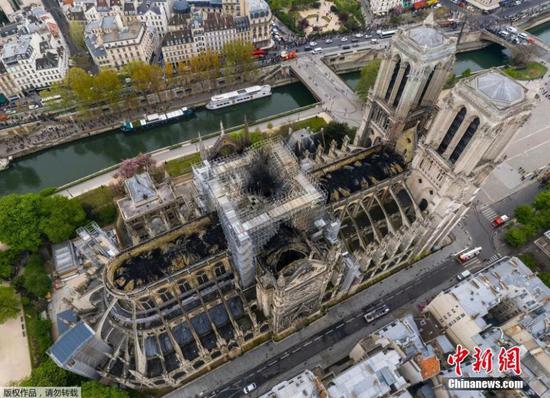 French lawmakers have begun deliberating a draft law aimed at outlining ways to rebuild in five years Notre Dame Cathedral which was severely damaged in a fire last month.

"We will rebuild Notre Dame de Paris... We will not confuse speed with haste. We must offer Notre Dame a restoration worthy of its splendour," said Minister of Culture Franck Riester.

"At certain points, it is urgent to intervene, at others we will take the time to reflect. The current situation of Notre Dame imposes these two approaches and this law manages to reconcile them," he told the National Assembly.

Rebuilding the cathedral in five years is an "ambitious timeframe," Riester acknowledged, but "we want to move quickly. Some have accused us of wanting to move too quickly but the outpouring of generosity was very fast so we can and must respond, which is what we are doing."

To that end, the proposed legislation defines a legal framework to the donations to guarantee transparency. To date, more than 1 billion euros (1.124 billion U.S. dollars) worth of donations have been received.

The donations will be used "to restore and preserve" the Notre Dame and "to finance the training of professionals with the specific skills that will be required for the work."

The draft law also outlines the creation of a public body to oversee and manage the restoration and allow the government to override regulations on planning, environmental and heritage protection, and public tenders in order "to facilitate the achievement of restoration work as soon as possible and in satisfactory safety conditions."

"There are very precise rules that apply to the restoration of heritage buildings and property, which are formalised in the code on cultural heritage and which correspond to France's excellence in this field," the minister said.

On April 15, a fire engulfed the cathedral's upper structure and destroyed the spire and the roof. Some 400 firefighters took part in the 15-hour battle to contain the blaze, which generated an outpouring of grief around the world. The cause of the fire has yet to be identified.

The cathedral, whose construction began in 1160 and continued over a century, has been a World Heritage Site since 1991. It receives 13 million visitors a year.