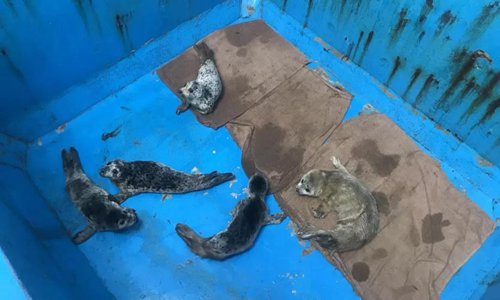 A total of 100 poached spotted seal cubs have been found by local villagers in a reserve in Dalian, Northeast China's Liaoning Province.

On Monday, 10 suspects have been detained by police for poaching, the local government said.

According to Dalian police, the poachers had planned to sell the cubs to aquariums around the country.

There are only 2,000 spotted seals in China.

Shi Xiaoming, deputy chief of Dalian's Spotted Seal National Reserve, said that the seals would be released into the wild once they meet the right conditions.

On February 11, residents in Laohutun town, Changxing Island in Dalian reported to police that they had found several spotted seal cubs at a local farm. The police then found 100 seal cubs after arriving at the scene. However, 29 had died by the time they got there.

The surviving 71 cubs were in a weak condition as they had not received milk from their mothers and became scared when they were hidden.

However, 10 more later died due to poor health.

The remaining 61 are currently in stable condition, according to the Dalian government press office on Monday, news website thepaper.cn reported.

Adult male seals are a common target for poachers, as people believe the seals' penises are an aphrodisiac, Tang Zailin, who works at an environmental volunteer association in Dalian, was quoted by China News Service as saying.

In recent years, cubs have also been poached and sold to aquariums to be trained for performances. Others are sold to restaurants to attract customers, Tang said.

The Dalian police announced Monday that 10 suspects had been detained in relation to the case, including two who gave themselves up to police on Monday morning. Two suspects are still on the run.

The suspects were local residents of Changxing Island and took boats to the spotted seal natural reserve several times to poach newborn seals.

They poached at the iced sea area between Yingkou and Panjin in northern Liaoning. The location is outside the reserve and is in a deep sea area, making it difficult for police to monitor and seize suspects.

"The suspects modified their boats so that they could break through the ice," Shi, the deputy chief of the reserve, said.

Shi said that spotted seal cubs usually live on the ice for 20 days and can swim after shedding their white hairs. During this period, they survive on their mothers' milk.

Spotted seals usually enter Liaodong Bay in the Bohai Sea in November and reproduce on the ice. In February and March of the following year, they move south and leave Bohai in May.

According to Article 341 of China's Criminal Law, illegally catching precious and endangered wildlife species under special state protection can incur a sentence of up to five years. If the circumstances are considered serious, the sentence can go up to 10 years.

Return to the wild

The spotted seal is the only pinniped that lives in China and is a second-class protected animal in the country.

Dalian's service center for natural resources affairs said Monday at a press conference that the rescued seals which meet the right conditions will be released back into the wild between March and May. The public will be allowed to watch the release.

The Liaoning Ocean and Fisheries Science Research Institute have purchased satellite tracking devices and will deploy them on some of the rescued seals in order to monitor their activity and position.

Meanwhile, researchers will collect hair and blood from the seals to study their genetic diversity and build a DNA profile.

According to a study by the institute, after training, rescued spotted seals are able to adapt to living in the wild and do not show any obvious behavioral differences from those entirely raised in the wild.

The spotted seals reserve in Dalian was founded in 1992. With the protection measures in the past few years, the number of seals in the reserve has increased from 1,000 to 2,000.