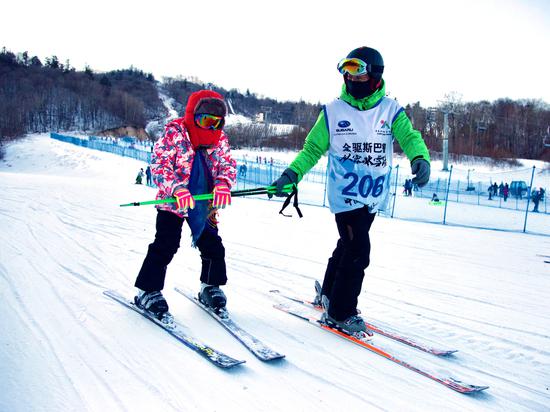 A tourist learns how to ski at a ski resort in Yabuli, Shangzhi city, Heilongjiang province, Jan 31, 2019. (Photo/Xinhua)

The Club Med Yabuli ski resort in Yabuli, Heilongjiang province, promised on Tuesday to pay guests triple the cost of their stay as compensation if they were affected by an outbreak of norovirus, a common cause of acute gastrointestinal illness.

Transportation and treatment costs will be also covered by the compensation, the company said in a statement posted on social media.

The club has suspended the reception of new guests and a professional health team has been sent to Yabuli to deal with the outbreak.

Eight tourists at the resort tested positive for norovirus, Harbin's Center for Disease Control and Prevention said on Monday.

On Feb 4, Chinese New Year's Eve, some guests at the resort began to exhibit symptoms that looked like food poisoning, including vomiting, diarrhea, stomachache and low fever.

Some tourists staying at the resort said more than 200 guests had fallen ill as of Sunday.

Soon after receiving reports of the symptoms, an investigation team organized by Harbin's Center for Disease Control and Prevention arrived at the club and registered the information of 42 tourists who said they felt uncomfortable.

Eight people were treated at nearby hospitals, but no one was admitted, the center said.

"I spent 25,400 yuan ($3,600) on a five-day trip for my husband, son and me at the club, including dining, accommodations and skiing," a 37-year-old tourist surnamed Liu from Shanghai said. "I am a loyal customer of Club Med and have had wonderful experiences in the past, so even though I felt it was a little expensive, I chose it without hesitation."

"In the afternoon on Saturday, I felt uncomfortable and began to have diarrhea and vomiting. I thought I was unaccustomed to the climate of a new place and decided to have some porridge from the club's cafeteria for supper," she said.

"However, I found several tourists doing the same thing when I arrived at the cafeteria. After a short chat, we found we were suffering from the same condition."

Liu's husband and two other tourists began to inquire room by room and found that members of more than 20 families had the same symptoms.

"We suspected it was food poisoning and asked the club to deal with the case as soon as possible," said Liu, who left the resort on Sunday morning. "So far, the club has given me no explanation or solution."

Liu told China Daily on Tuesday that she had not received any notification about compensation from Club Med.

Another female tourist, surnamed Wang, said some children had vomited in the public area, and the cleaners had mopped it up in a cursory manner, without using any disinfectant.

The club closed its cafeteria on Monday and offered guests packaged meals and instant noodles.

"We have started an investigation of water and food to try to find out the cause of the virus as soon as possible," Club Med said on Monday afternoon. "At the same time, strict prevention measures, including thorough disinfection, are underway."

A male guest surnamed Li said he had received a notice from Club Med on Tuesday morning listing the items eligible for compensation, but he said no details were included about how to apply for it.

"I hope they can settle the case properly and quickly," he said.

Club Med, a global resort brand, was acquired by Fosun Tourism Group in 2015 and is the company's biggest revenue generator.