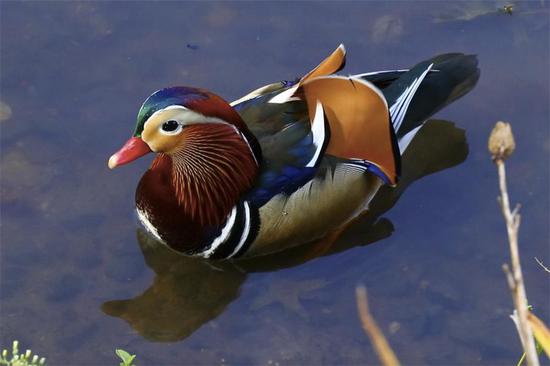 A rare appearance of a male Mandarin Duck at the Pond in New York’s Central Park to enjoy. (Photo/China Daily)

Hundreds of people gathered around the Pond over the weekend, a water body at the southeast corner of Central Park, just to get a glimpse of the male Mandarin duck, a brightly-colored bird originated in East Asia.

With its feathers of more than 10 colors, including bright red, sapphire and dark green, all shining and glowing in the autumn sunlight, the bird is becoming a favorite of photographers.

"Mandarin ducks are not naturally seen in our area," said David Barrett, a bird watcher for over seven years and operator of the Twitter account Manhattan Bird Alert that has tracked the Mandarin duck since its first appearance.

The ducks are commonly found in China, Japan and occasionally some parts of Europe, rather than North America.

Barrett and his fellow birders came up with two theories of why the duck showed up in Central Park.

It might be an unwanted pet as it is not an uncommon practice for people to bring pets they no longer want, particularly birds and turtles, to the park and release them, said Barrett.

The duck might also be an escapee from a nearby house, with New Jersey a particularly likely location as the state, unlike New York, allows these kind of birds to be kept as pets. 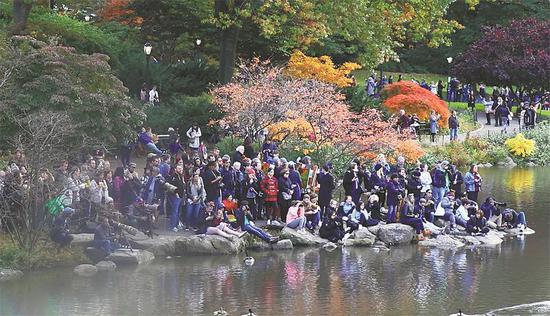 People originally suggestted that the duck might have escaped from a local zoo, but none of the four major facilities in New York has a lost Mandarin duck, ruling out this speculation.

Mandarin ducks do not breed with other species, and no female duck is around to accompany it, Barrett said. Because of that, it has been named "New York's most eligible bachelor" by New York Magazine.

The park authorities have publicly stated that they would not intervene with the duck unless it gets injured and needs medical care.

Still, Barrett believes that the duck is feeling at home in the park, and that is a good thing for the city.

"There's so much news today that is depressing or stressful," he said, "and this is just people going out to see a beautiful bird. I think that's great — we are excited about it.

"It's a fun thing — people can have a good time," added Barrett, "and maybe they will take an interest in nature, and in other wild birds."