People who attack medical staff to be blacklisted 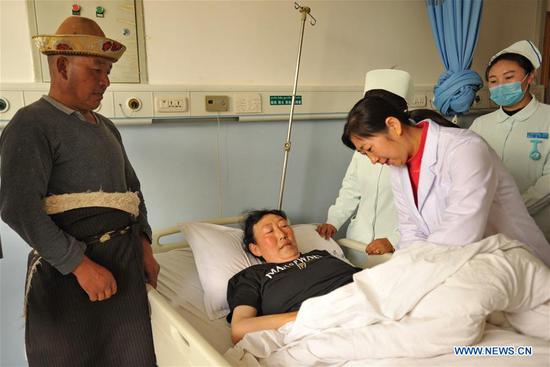 People who attack medical staff will be placed on a blacklist, according to a circular released by China's top economic planner on Tuesday that is designed to deter illegal acts targeting medical staff and institutions.

Those who receive punishments such as administrative detention from the public security authorities, or criminal punishment by judicial organs, for offenses such as purposefully injuring medical staff in hospitals or carrying weapons into hospitals illegally, will be put on the blacklist, said the circular, which was approved by 28 central government departments.

Information about those on the list will be shared among the 28 departments, including the National Health Commission, the Ministry of Public Security and the Ministry of Transport, the circular said.

They will face punishment including restrictions in getting government subsidies, seeking government employment, and traveling in first-class sections on planes and high-speed trains.

The National Health Commission will keep updating the list, and those removed from it will no longer be punished, the circular said.

Deng Liqiang, director of the Chinese Medical Doctor Association's legal affairs department, applauded the new measure and said it will be an effective deterrent to violations against medical staff.

"It will punish in every aspect those who seriously disrupt medical order, and greatly protect the security of medical staff," he said. "We also would like to call on all medical staff to do more to care for patients to honor their duty."

Zheng Bin, a college teacher in Beijing, said incidents such as violence against medical staff should be punished, but hospitals should improve communication with patients when disputes occur.

Patient-doctor relations have generally improved in recent years, but reports of medical disputes resulting in injuries to medical staff continue to make headlines.

On Saturday, a 46-year-old man, surnamed Zheng, was detained by police for criminal investigation in Beijing for beating a gynecologist at Peking University First Hospital on Sept 22 after the doctor refused to give a C-section to his 44-year-old wife.

A regulation released in August by the State Council, China's Cabinet, said patients and doctors should seek legal means to resolve disputes, and medical institutions should improve management to provide safer and better services.

Guo Yanhong, deputy chief for medical administration and supervision at the National Health Commission, told a news conference last month that the number of medical disputes in China had declined by 20 percent over the past five years due to improved service quality and intensified measures to fight crimes against medical staff.