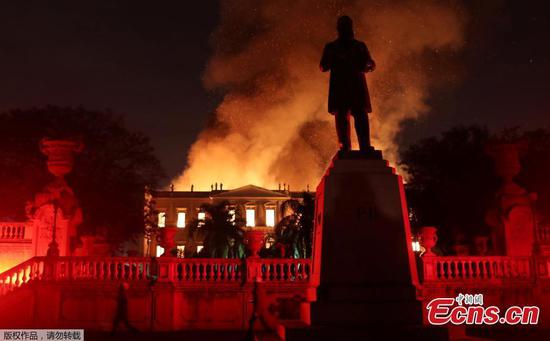 A massive fire on late Sunday raced through Brazil's 200-year-old National Museum in Rio de Janeiro, causing no casualties but probably the total loss of a collection of more than 20 million items.

The fire broke out around 7:30 p.m. Sunday local time (2230 GMT) when the museum was closed to the public. The museum press service reported no injuries, saying all the four security guards fled the fire. The cause of the fire remains unknown.

The three-story building located in Rio's north used to be the official residence of Portuguese and Brazilian royal families. It houses archaeological finds including some of the first fossils found in Brazil, historical relics since 1500 when Portuguese arrived, and artefacts from Egypt and other countries as well as Greco-Roman art.

"This is a tragic day for Brazil. Two hundred years of work and research and knowledge are lost," President Michel Temer said in a statement.

The huge fire engulfed hundreds of rooms of the museum building. Some 20 fire brigades rushed to the scene immediately after the fire erupted, but they have so far failed to bring the fire well under control. The museum said all its collection might be destroyed and the whole building might collapse.