85 injured in Mexican plane crash but no fatalities 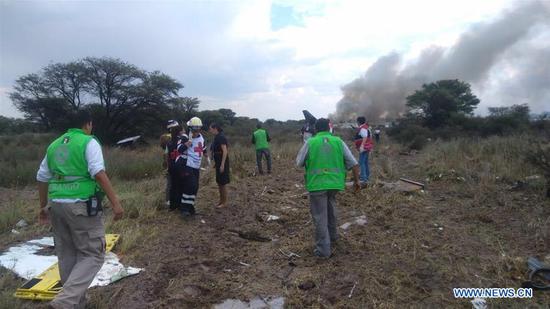 Photo taken with a mobile phone and provided by Durango's Civil Protection Department shows rescuers working at the site where a plane crashed in Durango, Mexico, on July 31, 2018. An Aeromexico plane crashed in the northern Mexican state of Durango, local media reported on Tuesday. (Xinhua/Durango's Civil Protection Department)

An Aeromexico plane carrying more than 100 people crashed in the northern Mexican state of Durango on Tuesday, but there were no fatalities, authorities said.

"We confirm that there were no fatalities in the accident of flight AM2431," Durango Governor Jose Aispuro said on Twitter.

Alejandro Cardoza, a spokesman for the state's civil protection agency, said in an interview that around 85 people had been injured, adding that a fire resulting from the accident had been put out.

The civil protection agency said 37 people were hospitalized, while the state health department said two passengers were in a critical condition.

The plane, which was flying to Mexico City, went down shortly after taking off from Guadalupe Victoria International Airport at 3:40 p.m. local time (2040 GMT).

The plane "was carrying 97 passengers and four crew members on board," Transportation Minister Gerardo Ruiz Esparza said on Twitter.