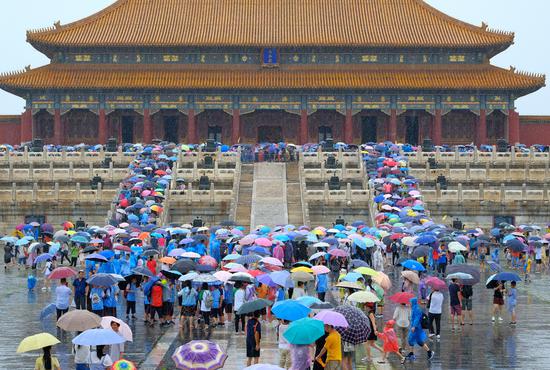 Visitors hold umbrellas in front of the Hall of Supreme Harmony at the Palace Museum, also known as the Forbidden City, in Beijing on Tuesday. Heavy rainfall hit the capital and led to road collapses in the city's suburbs. (LIU QIJIANG / FOR CHINA DAILY)

About 1 p.m. on Tuesday, scores of tourists stranded at scenic spots in Shicheng, in Beijing's Miyun district, were able to step through rubble to pavement hastily built overnight by road repair workers, ending an ordeal that began the night before.

Food and medicines were provided.

Liuxing Road, the only way to or from the area, had been washed away by heavy rains on Monday night.

The rainfall, which hit the capital with a vengeance over the weekend, led to road collapses in Huairou, Miyun and Fangshan districts. It also caused street floods in some urban areas and the disruption of air service.

The torrential rains are forecast to last until Wednesday, and city authorities are working around the clock to make repairs.

Beijing Meteorological Service issued on Monday a new yellow alert — the second-lowest level in a four-tier warning system — for rainfall and the lowest alert for flooding.

The average precipitation in the capital from its rainstorms starting on Sunday reached 98 millimeters as of Tuesday, with some parts in Miyun district reaching almost 380 millimeters, it said.

According to Beijing Capital International Airport, about 310 flights had been canceled on Tuesday by 7 pm.

A total of 179 scenic spots in Beijing were shut down through Tuesday due to heavy rains. Sites shut down include the popular Fragrant Hills Park and Juyongguan Pass of the Great Wall.

They will not reopen to the public until all risks are eliminated, the city's tourism authority said on Tuesday.

Cai Qi, Party chief of Beijing, urged authorities on Monday to carry out a screening search to eliminate danger in the most vulnerable villages, and to ensure transportation, and water and power supplies remain in place.

According to Beijing's flood control authority on Tuesday evening, more than 5,300 people have been relocated from flooded areas, including 3,725 from Miyun district. No casualties were reported.

Of the 35 road collapses recorded as of Tuesday, 26 have been repaired, it said. The city's fire departments received more than 310 calls seeking help related to the rainfall, and 166 people were evacuated.

Electricity has been restored to most of the 4,100 households that lost power, with only 165 households still experiencing a blackout, said the flood control authority.

All could regain power by Tuesday night, it added. Some 1,100 electric company employees have been involved in the repairs.

More than 3,100 people from Beijing Drainage Group have joined the rescue work, and the road floods in 14 areas including in Shijingshan and Changping districts have been effectively addressed, the authority said.

Heavy rains and floods also swept across many parts of China. Storms were forecast to hit areas including North China's Beijing, Tianjin, Hebei and Northeast China's Liaoning and Heilongjiang from Tuesday to Wednesday, according to the National Meteorological Center.

Guangdong, Hainan and the Guangxi Zhuang autonomous region will also be hit by downpours during the period. The precipitation could exceed 80 millimeters per hour in some regions, the center said.