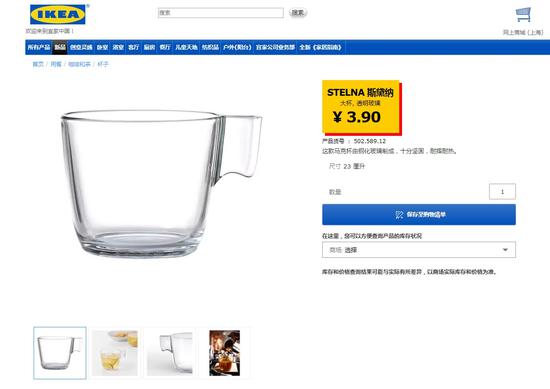 The "Stelna" glass is still on sale at IKEA stores. /Snapshot of IKEA website

IKEA has been ordered to pay 40,000 yuan (6,000 US dollars) in compensation in addition to a 3.9-yuan (59 cents) purchase refund to a Chinese woman who was injured when a glass cup she purchased from the home furnishing giant exploded while she drank from it.

The woman, identified as Wang, bought a "Stelna" glass water cup from an IKEA store in Beijing in 2016, but the product exploded on May 20, 2017 when she was drinking "cooled boiled water."

Wang was hospitalized after losing consciousness. She lost one of her front teeth, and her lips required four stitches.

She took the Swedish company to court earlier this year, accusing it of selling faulty products and asking for one million yuan (150,000 US dollars) in compensation.

Wang said she had been to the hospital 12 times since the incident, and has suffered from a severe psychological trauma, including insomnia, anxiety and panic attacks.

IKEA argued their cups were manufactured in line with industrial standards. They submitted reports from the Shanghai Municipal Bureau of Quality and Technical Supervision about thermal shock tests and heat resisting durability, in addition to the product's qualification certificate.

The court in Beijing said there was no sufficient evidence to prove that IKEA had sold customers products knowing it was flawed as the plaintiff had claimed. But because of the negative effects and painful experience that the cup blast had caused, IKEA was ordered to compensate Wang for her injuries, including medical fees, transportation, lost income, and mental damage recompense.

Wang will reportedly appeal against the verdict, asking for a bigger settlement.

The case has attracted wide attention on China’s Twitter-like Weibo.

"It is really expensive to undergo dental restoration, especially for the front tooth. Besides, she had scars on the face. If the cup was truly flawed, 40,000 yuan is too little compared to her loss," a user who goes by the name @Lulujie1991 said.

"Just want to mention that the injury is a life-long one, her restored tooth would be sensitive to hot or cold food and beverages," @Choupaomiao commented.

“The court should order a large punitive compensation, or the company won’t take the potential danger seriously," @Beipiaowang noted.

It was not the first time that IKEA glass products caused a stir. The brand recalled its "Lyda" cups and "Rund" glass mugs in 2013 and 2011 respectively.

The Stelna cups are still on sale at local IKEA stores for 3.9 yuan.