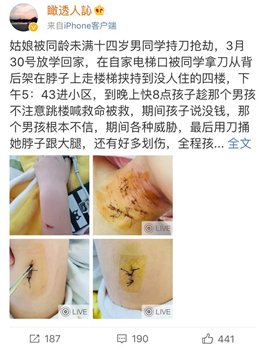 Deng, the girl's mother, posted on Weibo to unveil what happened to her daughter. / Screenshot from Weibo

The case of a 13-year-old boy accused of attacking a 14-year-old girl with scissors was not prosecuted because he was too young has once again drew China’s concern regarding the country’s minimum age of criminal responsibility, which was set at the age of 14.

The girl’s mother, identified as Deng, said in her post on China's Twitter-like Weibo on June 4 that her daughter, surnamed Zhang, was hijacked by a boy with scissors when she was waiting for the elevator in the building she lived in Xiaogan City, central China’s Hubei Province, on March 30.

Zhang was later found hiding in the building by the local police, naked, and covered with blood all over her body, with several wounds in her neck, arms and legs, reported the Cover.

The local police released an official announcement on Weibo on June 27, saying that they had captured and detained the boy, identified as Huang, on the night of March 30, but they had already released him because he hadn't reached the age of 14.

According to China’s Criminal Law, juveniles who haven't reached the age of 14 would not be prosecuted when they commit crimes.

Deng was not satisfied with the result and continued to post on her Weibo in a bid to raise more awareness on this case, which had gained more than 10,000 reposts and nearly 8,000 comments.

“Someone told me that the law protected the underage criminals, but who can protect my young daughter as a victim?” Deng said in one of her post on June 24.

Zhang was stabbed by Huang on her neck, arms and legs using scissors after Huang failed to steal money from her, and she was later forced to take off all her clothes in front of the boy, according to the girl's mother Deng.

Since the suspect Huang didn’t reach the age of criminal responsibility, the victim could file a civil claim to seek compensation, according to the local police. However, the police said the two sides didn’t reach an agreement over the compensation.

Deng told the Paper that she didn’t care how much money she could receive, but what she expected was a well-rounded law. “Law should protect the minors, not the perpetrators,” said Deng.

This case has raised wide public concern regarding China’s age of criminal responsibility, with some legal experts calling for a lower age, reported the Paper.

There has always been controversy surrounding the country’s age of criminal responsibility, said Luo Zhoumin, a Beijing-based lawyer, reported the Paper.

Xu Xin, law professor at the Beijing Institute of Technology, told the Paper that academia generally accepts the lowering of age because juveniles now mature earlier. He also suggested that the age should be lowered during the next amendment to the country's criminal law.