From worker to startup entrepreneur: Taiwan youth Cheng Po-yu's faith in the Chinese mainland pays off 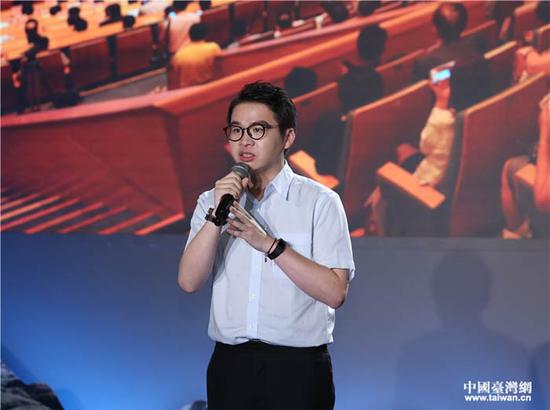 "At the worst time, I even thought about pasting cell-phone screen protector for passer-by on a flyover as a living, even that, I just have to stay in the mainland."

Cheng Po-yu, a young lad from China's Taiwan, recently shared his story at the story-telling meeting of the 10th Straits Forum in Xiamen, Fujian Province, the biggest non-official platform between Chinese mainland and Taiwan.

Why is he so attached to the Chinese mainland? What attracts him in the mainland?

In the words of Cheng, he fell in love with Beijing at first sight. By 2015, he joined the 7th Taiwan Strait Forum, an experience which gave him more confidence in the development of the mainland and finally made him determined to move to the mainland for more opportunities.

“You can feel the pace of development in a lot of cities of the mainland. Every time you come here, you feel the change. This is a place where you can sense you are moving forward along,” he said.

Everyone has encountered difficulties, either big or small, on their way to big development in careers, so did Cheng.

When he first arrived in Chinese mainland, he had a rough start. Working for a company from Taiwan provided him with no welfare benefits or regular day-offs like other companies from the mainland, but his determination to work in the mainland never waived.

Cheng said he was sure that by doing so, he would benefit greatly in his future development, thus he just needed to hang in there.

Looking back on that experience, Cheng recalled that he even said to his friends that he wanted to stay even if he had to sell smartphone screen protector films on a flyover.

"You can see that one can make a living even through pasting screen protectors, and I have confidence I can do that," he joked.

In February, 29 mainland departments including the Taiwan Affairs Office of the State Council and the National Development and Reform Commission issued a total of 31 measures to promote cross-Strait economic and cultural exchanges and cooperation, which offers unprecedented advantages for residents in Taiwan to develop career in the Chinese mainland.

Cheng said the measures give Taiwan residents a fair chance to start their career in the mainland and serves many local entrepreneurs.

This preferential treatment enables young people who are already developing in the mainland to do what they really plan to do. For those who take a wait-and-see attitude, this can certainly strengthen their confidence to develop in mainland, Cheng noted.

At the invitation of the Shougang Group Vstartup, Cheng later became the groups first employee from Taiwan, responsible for creating a platform for young people like him to work in the mainland.

As the general manager of the HK, Macau and Taiwan division, his life has changed beyond expectations: he used to work behind the scenes, but now he completed thousands of large-scale lectures, frequently traveled across the Taiwan Strait and met friends throughout China.

Cheng said the enterprises he served were scattered in 13 locations in Beijing, covering 50 teams from Taiwan with 200 people, which are mainly involved in creative culture, theater, service industry, sci-tech agriculture and e-commerce.

Addressing the opening remarks of the 10th Straits Forum, Wang Yang, member of the Standing Committee of the Political Bureau of the Communist Party of China (CPC) Central Committee and Chairman of the National Committee of the Chinese Peoples Political Consultative Conference (CPPCC), said that the two sides of the Taiwan Strait have close economic links and are highly complementary.

The mainland is willing to give priority to sharing development opportunities of the mainland with Taiwan companies and vows to be fair to both Taiwan and mainland companies in related policies without distinction, in order to bring more benefits to people, Wang said.