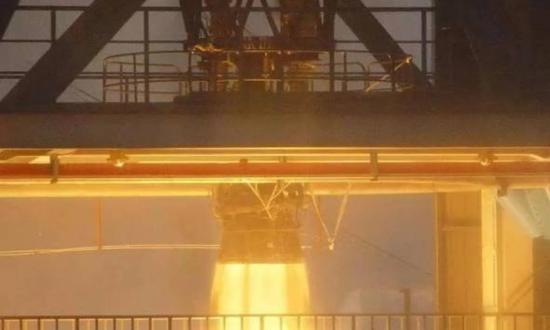 The reusable engine model was developed by Xi'an Aerospace Propulsion Institute, a subsidiary of the 6th Academy of the state-owned aerospace giant China Aerospace Science and Technology Corporation (CASC).

In the verification flight test, the engine first served as the main engine in the maiden flight and after being inspected and maintained, successfully supported another repeated flight test, realizing the reuse of liquid rocket propulsion for the first time in the country's aerospace history, according to the Xi'an-based developers.

Zhang Xiaojun, head of the Xi'an-based institute, said it showed that engine reusability technology in the country has reached a practical use stage, and he vowed that they will continue to explore technology solutions in order to provide robust support for the country's space program.

The Xi'an institute did not reveal the thrust of the engine or what launch vehicle was deployed in the flight test as of press time. The CASC Sixth Academy told the Global Times that further details concerning the test would be released on Wednesday.

The US Space Shuttle Maine Engine (SSME) achieved partial reusability in the 1980s, but the SSME did not reach its designed capability of being reusable for 55 flights in practice before its retirement with the Space Shuffle in 2011. According to Mark Adler, a former NASA JPL system engineer, each Space Shuttle Main Engine was designed for 55 flights but they actually flew an average of about 10 flights each.

Technology developed by SpaceX known as the reusable vertical takeoff, vertical landing rocket (VTVL) which conducted a successful landing in 2015 and at a sea platform in 2016 marked the latest development of reusable launch vehicle technology in the 21st century.

Long March-8's enhanced variant in the future could be the first Chinese rocket to become a VTVL launcher, space observers said.