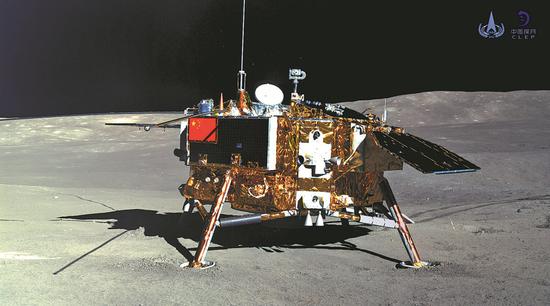 China is making preparations for a moon landing that will place its astronauts on the lunar surface, according to a senior official at the China Manned Space Agency.

Dong Nengli, head of the agency's technology bureau, said at a news conference at the Publicity Department of the CPC Central Committee in Beijing on Friday afternoon that space program planners and engineers are researching the road map and technologies for the manned moon landing.

"The results of their work will be seen in due course. Our astronauts will definitely touch down on the moon," he told reporters.

The news conference invited key figures from China's manned space programs, who are also members of the Communist Party of China, to share their stories and thoughts with journalists.

China's space authorities have a long-term plan to land astronauts on the moon and set up at least one scientific station there. They hope to use the manned missions to carry out scientific surveys and technological research, explore ways to develop lunar resources and strengthen the nation's space capabilities.

Zhou Yanfei, a deputy chief designer of China's manned space program, said in September 2020 that the country has the capacity to independently land astronauts on the moon because of its technologies, well-trained, innovative professionals and efficient research and management systems.

"The nation's current rockets and manned spaceships can't send astronauts to the moon because they are not designed for such a mission. We need to design a new rocket, a new spacecraft, a lunar landing capsule and a new spacesuit fit for a moon walk. We also need to upgrade our ground support system that was designed for operations in low-Earth orbit rather than on the lunar surface," he explained.

Designers at the China Academy of Launch Vehicle Technology, the country's major maker of carrier rockets, are researching a super-heavy rocket that will be several times bigger and mightier than the Long March 5, now the biggest and strongest in China's Long March rocket family.

With a length of nearly 90 meters, the new rocket, which has yet to be named, will have a liftoff weight of about 2,000 metric tons and will be able to place a 25-ton spacecraft into an Earth-moon trajectory, designers said, adding that this new model will serve the manned lunar landing.

China has conducted three robotic landings on the moon, deployed two rovers and brought samples back to the Earth.