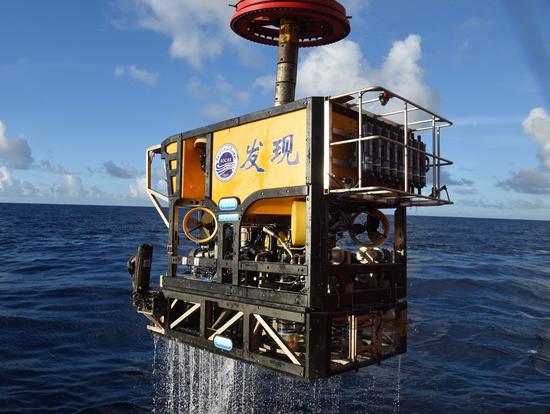 Discovery, a remote operated vehicle (ROV) aboard China's research vessel KEXUE (Science), returns from a dive in western Pacific Ocean in a recent dive, May 30, 2019. KEXUE is carrying out a 20-day long investigation over a series of seamounts in the south of the Mariana Trench in the western Pacific Ocean. (Xinhua/Zhang Xudong)

Chinese researchers and collaborators recently found that hadal trenches, the deepest parts of an ocean, receive a large amount of mercury.

The study, published recently in the Proceedings of the National Academy of Sciences (PNAS), was conducted by a research team led by Xu Yunping, with Shanghai Ocean University and its international collaborators.

Through the full-ocean-depth lander, self-developed by the Hadal Science and Technology Research Center of Shanghai Ocean University, researchers collected sediment samples from hadal zones, that can have depths of 6,000 to 11,000 meters, including the Mariana Trench, and found that even the world's deepest ocean realm is accumulating mercury at remarkably high rates greater than the global deep-sea average, with most mercury in these trenches being derived from the surface ocean.

According to vertical profiles of mercury concentrations in trench cores, there are notable increasing trends from pre-1900 to post-1950, while one of the major factors of the increase is due to the increasing mercury delivery from anthropogenic sources, the study said.

Hadal trenches are a large marine sink for mercury and may play an important role in the regulation of the global biogeochemical cycle of mercury, according to the study.