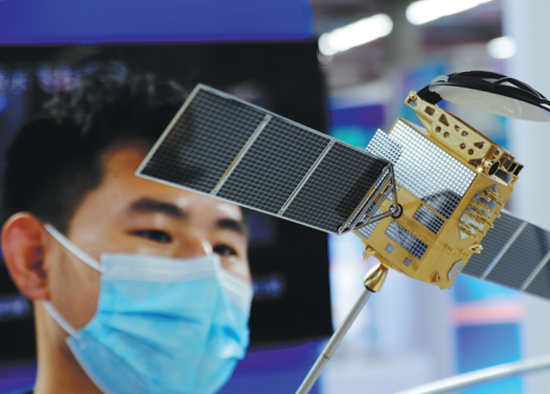 An attendee looks at a model of a Beidou Navigation Satellite at an expo in Shenyang, Liaoning province, in September 2020. (HUANG JINKUN/FOR CHINA DAILY)

China will work with Russia, India, Brazil and South Africa to establish a network of remote-sensing satellites to help to deal with global challenges such as climate change, major disasters and environmental deterioration.

The heads of national space agencies in BRICS countries met on Wednesday via video link and signed the Agreement on the Cooperation on BRICS Remote Sensing Satellite Constellation, according to a statement published on Wednesday night by the China National Space Administration.

The agreement enables cooperation among BRICS space agencies to build a network of remote sensing satellites as a data-sharing mechanism.

CNSA proposed the space-based network's establishment in 2015 and worked with its counterparts in other BRICS nations to realize it, the statement said.

The network will consist of several operational satellites, including China's CBERS 4 and Gaofen 6, as well as India's Resourcesat-2.

Ground stations in Brazil's Cuiaba, India's Shadnagar–Hyderabad, China's Sany, South Africa's Hartebeesthoek and Moscow will receive data from the satellites, according to the statement.

The network will become the first joint effort by BRICS countries in space-based infrastructure.

Remote sensing satellites refer to satellites tasked with observing, surveying and measuring objects on land or at sea, as well as monitoring weather.