Items sent into space on new craft returned to owners 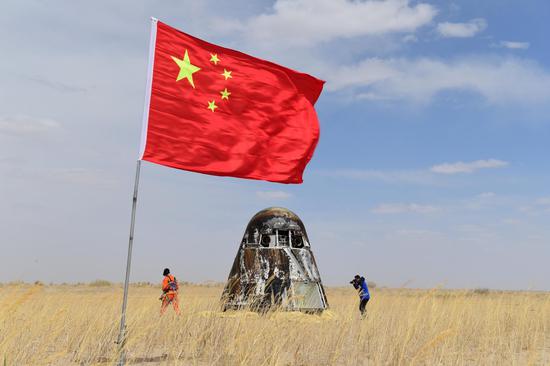 The re-entry module of the prototype of China's new-generation manned spacecraft successfully landed at 1:49 pm on May 8, 2020 at the Dongfeng Landing Site in North China's Inner Mongolia autonomous region. (Photo by Wang Jiangbo/For chinadaily.com.cn)

Chinese engineers opened the re-entry module of the prototype of China's new-generation manned spacecraft that returned to Earth earlier this month, distributing items inside it to their owners.

Dozens of items carried by the re-entry module were delivered to related parties at a ceremony on Friday afternoon at the China Academy of Space Technology in Beijing -- nationals flags of Pakistan and Argentina were given to diplomats from the two countries; a 3D printer was handed over to the Chinese Academy of Sciences; plant seeds were returned to researchers from several provinces; and scientific experimental equipment were delivered to their developers.

Nearly 100 items, ranging from test equipment and experimental devices to cultural products, were sent into space inside the module.

The re-entry module of the prototype of China's new-generation manned spacecraft successfully returned to the Earth on May 8, landing at the Dongfeng Landing Site in the Inner Mongolia autonomous region. It was then recovered by personnel from the Jiuquan Satellite Launch Center.

The new spacecraft's prototype, consisting of re-entry and service modules, was lifted into low Earth orbit on the maiden mission of China's Long March 5B heavy-lift carrier rocket on May 5 from the Wenchang Space Launch Center in Hainan province.

During its 68-hour journey, the prototype carried out several scientific experiments and technical tests and also verified key equipment for the new-generation spaceship such as heat-resistance, control and recovery devices, the China Manned Space Agency said.

Once put into formal service, the new manned spaceship will employ world-class designs and technologies and feature great reliability and flexibility, multiple functions and reusability. 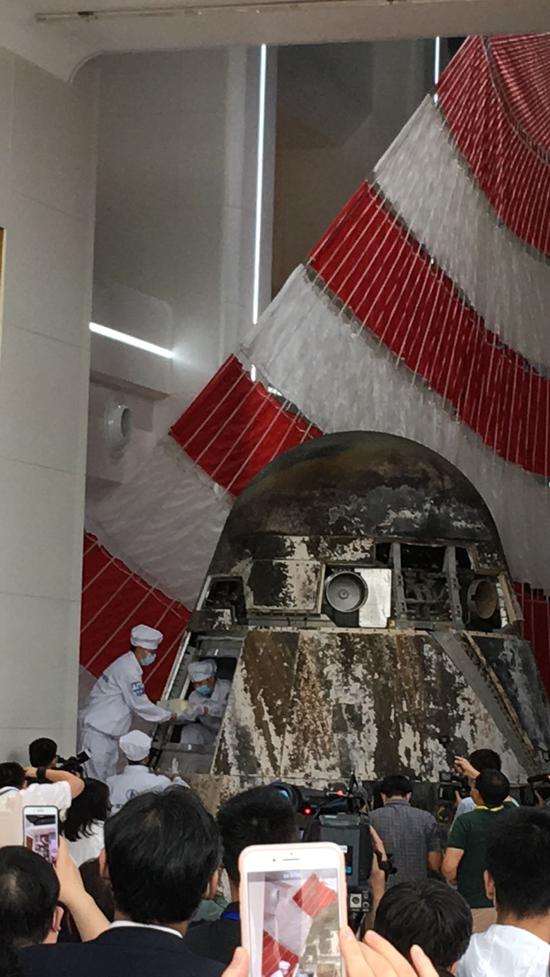 Chinese engineers open the re-entry module of the prototype of China's new-generation manned spacecraft that returned to Earth earlier this month, distributing items inside it to their owners, May 29, 2020. (Photo by Zhao Lei/chinadaily.com.cn)

The re-entry module will house astronauts and control the craft during spaceflight. The service module will contain power and propulsion systems.

The new spaceship will have a length of 8.8 meters, a diameter of 4.5 meters and a liftoff weight of 21.6 metric tons. It will be tasked with serving the construction and operation of China's soon-to-be-constructed space station as well as the country's manned lunar missions being planned by scientists, the agency explained.

Designers at the China Academy of Space Technology in Beijing said that compared with the Shenzhou series, the country's operational crewed spacecraft family, the new model will be capable of conducting longer missions, housing more astronauts and cargo and operating in tougher environments.

China will soon start putting together its first manned space station. A total of 11 Long March 5B, Long March 7 and Long March 2F missions will put the station's major components into orbit and transport astronauts there to assemble the station, which is expected to become fully operational around 2022 and operate for about 15 years.