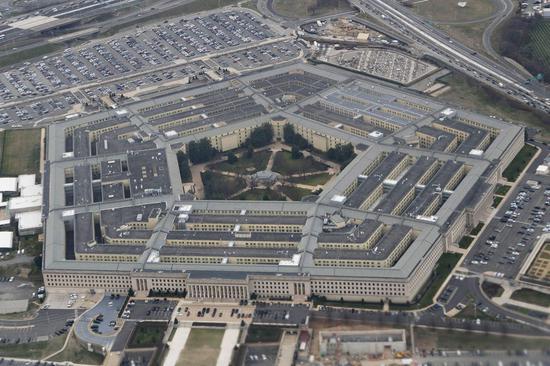 Photo taken on Feb. 19, 2020 shows the Pentagon seen from an airplane over Washington D.C., the United States. (Xinhua/Liu Jie)

Washington has entangled countries close to Russia and China, including those in Central Asia, with networks of military bio laboratories, the Russian "Military Political Analytics" online magazine has said.

Washington rejected the protocol to the Convention on the Prohibition of the Development, Production and Stockpiling of Bacteriological (Biological) and Toxin Weapons and on Their Destruction, which involves the establishment of mechanisms for monitoring the implementation of obligations under the convention, it said in a recent article.

Moreover, in case of leakage of biological weapons from dual-use labs in the Commonwealth of Independent States (CIS), the United States will transfer its responsibility to the host countries, which de jure control those facilities, the magazine said.

In 2004, the Pentagon's Defense Threat Reduction Agency (DTRA), as part of a joint biology collaboration program with Uzbekistan, began creating a network of labs for controlling the spread of infectious diseases in that country, according to the magazine.

The first national diagnostic lab in Uzbekistan was opened by the DTRA in 2007 in Tashkent with the support of the United States Agency for International Development, with analogous labs opened in Andijan and Fergana in 2013, and in 2016 in Urgench.

In addition, the United States funded the modernization of diagnostic labs deployed on the basis of the Uzbek Republican Institute of Microbiology, the Defense Ministry's Central Military Hospital, the Research Institute of Virology and the Center for the Prevention of Quarantine and Highly Infectious Infections of the Ministry of Health.

Currently, a number of other facilities are also under U.S. control, including sanitary surveillance stations in Andijan, Urgench, Fergana and the veterinary center of Uzbekistan, the magazine said.

The article noted that outbreaks of infections have begun to be observed in Uzbekistan in places where U.S. military biological facilities operated.

In August 2011, an unknown disease suddenly flared up in the Tashkent region, and the symptoms of the disease were very similar to cholera. In 2012, the country was hit by a new disease, which almost simultaneously killed more than 10 people.

In the spring of 2017, a chickenpox epidemic broke out in Uzbekistan, which affected a large number of adults. Since January 2019, 279 cases of measles have been reported. Also, meningococcal infections are rising in the Central Asian country.

Anna Popova, head of Russia's consumer rights and human well-being watchdog Rospotrebnadzor, at a meeting of the heads of the Security Councils of the CIS countries, expressed concern over the outbreaks of previously unknown infections in places where the U.S. military labs had opened, the magazine said.

In Tajikistan and Kyrgyzstan, there are no DTRA facilities, but Washington works on biosafety issues in the two countries through its structures, non-government organizations (NGOs) or "scientific partnerships."

Through such "scientific" partnerships, the Pentagon and the intelligence services of North Atlantic Treaty Organization (NATO) countries have gained access to top-secret technologies, intellectual property products of scientists from former Soviet Union countries and promising areas for future research, the magazine said.