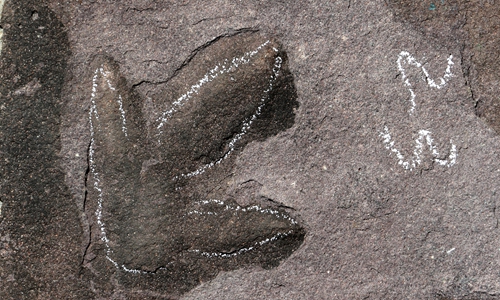 Paleontologists on Friday announce the discovery of a dinosaur footprint site that dates back to the Jurassic period in Chengde Mountain Resort, North China’s Hebei Province. (Photo/Courtesy of Xing Lida)

Led by a Chinese dinosaur expert, a team of international paleontologists on Friday announced the discovery of a massive dinosaur footprint site that dates back to the Jurassic period at an ancient imperial resort in North China.

Footprints from multiple species of dinosaur were discovered in Madigou Village in Chengde, Hebei Province, according to a statement Xing Lida, a dinosaur expert at the Beijing-based China University of Geosciences and leader of the international team, sent to the Global Times on Friday.

The village is known for producing paving stones which were used to build the Chengde Mountain Resort, a summer retreat for Qing Dynasty (1644-1911) emperors. It is now known that many dinosaur footprints lay below the floors of the palace which was constructed in 1703. 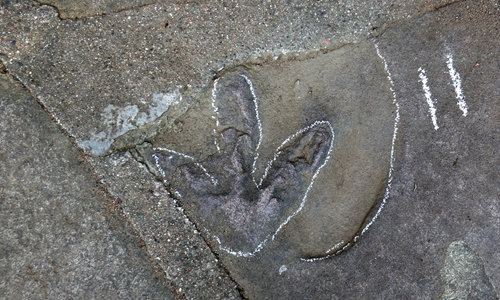 Paleontologists on Friday announce the discovery of a dinosaur footprint site that dates back to the Jurassic period in Chengde Mountain Resort, North China’s Hebei Province. (Photo/Courtesy of Xing Lida)

The discovery revealed a diverse dinosaur group that inhabited in the area, providing records of the evolution of dinosaurs in North China, Xing said in the statement.

Multiple similar discoveries since 1992 in Chengde had caught Xing’s attention, and he began a detailed inspection of the area in 2007 together with Martin Lockley from the US’ University of Colorado and Anthony Romilio from Australia’s University of Queensland.

Only a few, isolated footprints had been discovered by 2006, and Xing and his team’s research has enriched Chinese dinosaur records, according to the statement.

The huge quantity of footprints and their well-preserved state are highly valuable to our understanding of dinosaur evolution, the statement read. It noted that the research will help scientists discover more about dinosaurs’ behavior, habits and living environments, to the extent that they could reproduce the area’s ancient environment and understand how the climate changed at the time.

Xing and his team are closely communicating with related local authorities about how to protect the site and use it for tourism, science and educational purposes.