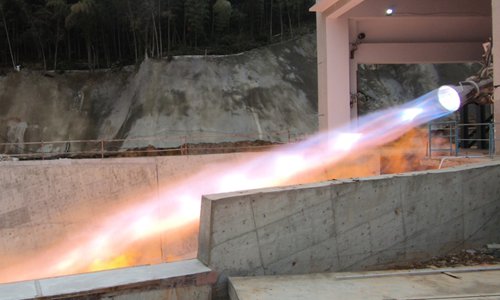 Chinese private rocket firm LandSpace on Saturday held a successful long-range trial run of the variable thrust of the largest reusable liquid oxygen methane engine in the country, laying foundation for the recovery of reusable rockets.

The engine named TQ-12, which was independently developed by LandSpace, completed its 200-second test that covered the entire flight time of the rocket. A major focus was on the feasibility of the engine thrust regulation and preliminary examination of the reliability of the engine itself, according to a statement sent to the Global Times by LandSpace.

The trial was a breakthrough in both the technique of double cryogenic rocket engine thrust regulation and the high-precision cryogenic regulator. In addition to laying a technical foundation for the recovery of reusable rockets, it will also help optimize the rocket's flight trajectory and the fault diagnosis before take-off, said the statement.

Sun Jiadong, a member of the Academic Divisions of the Chinese Academy of Sciences, lauded the successful ignition of the TQ-12 engine and praised the technology breakthrough involved in the recovery of the reusable rocket.

Sun played a leading role in the design of the China's first recoverable remote-sensing satellite and first geostationary communication satellite from 1970s-80s.

"It is a great breakthrough for LandSpace, and with variable thrust, the company's TQ-12 engine could also promote the development of its ZQ-2 launch system," Huang Zhicheng, an expert in the space industry, told the Global Times on Sunday.

The ZQ-2 launcher is a medium-scale, low-cost commercial launch vehicle system that was independently developed by LandSpace, and it is expandable to becoming reusable launcher in the future.

The highlights of the TQ-12 rocket engine include being non-toxic, highly reliable, highly performing, low cost, easy to operate and reusable, which is the evolutionary direction of the main rocket engine.

Before the latest long-range trial run of variable thrust, LandSpace also had a successful trial run in July, with the longest test run of 100 seconds.

"China has been playing a leading role in the private rocket field in the world, and there are several companies in China doing research into reusable launch vehicles, including iSpace," Huang said, adding that the industry has a prosperous outlook.

China's private rocket industry has made fruitful achievements within the year, such as iSpace successfully launching a carrier rocket into orbit in July from the Jiuquan Satellite Launch Center. That was a milestone for China's commercial space industry achieved by the first Chinese private space company to do so.

"Though China's private rocket sector has developed rapidly, there are challenges remaining such as the lack of a long-term top-level strategic design of the industry's development," Huang said.