Your Tesla is ready to come to you on its own 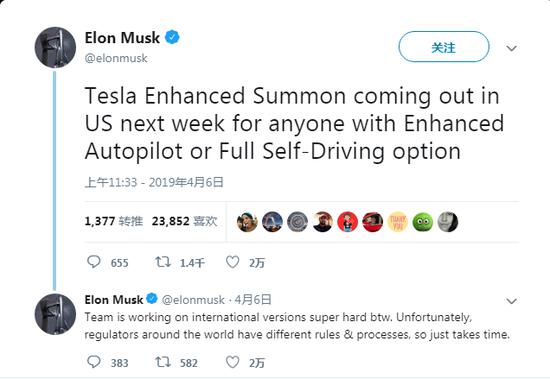 Elon Musk, CEO of Tesla, announced on his personal Twitter account Saturday the Tesla Enhanced Summon feature will be delivered to its U.S. customers with Enhanced Autopilot or Full Self-Driving options next week.

By then, only the U.S. version will be viable as rules and regulations differ in overseas markets, he added.

The much-anticipated feature will make your Tesla go after you on its own when your whereabouts have been located by the Tesla App.

The owner has to remain at the exact same spot while the maximum distance between the driver and the car will be 46 meters.

Enhanced Summon will also allow the vehicle to pull out of the parking lot, navigate around objects, estimate the environment and come directly to you, will be available to its customers over Tesla's over-the-air (OTA) upgrade system.

According to TechCrunch, it has started to be available more widely a few weeks ago to some owners. On video sharing platforms, there are already numerous video demonstrations of Enhanced Summon in action. Now it appears it will have a wider release, based on Musk's tweet.

Tesla has been gradually upgrading its Autopilot features with regular software updates over the years. Last week, they released a new version of Navigate on Autopilot, a guidance feature that is viewed as a step towards fully automated driving on highways, after its first launch in 2018.

Although the much-hyped autonomous driving has been discussed for years, people's concerns over self-driving safety have never faded.

In May 2016, a motorist in California died after his Tesla vehicle crashed into a track when driving on Autopilot mode, marking the first Autopilot accident leading to fatality in the US.

In the same year, a Chinese Tesla owner crashed into the back of a cleaning car in north China's Hebei Province while driving on a highway on Autopilot mode.

According to the local police, the victim was held responsible for the accident, but his family accused Tesla's technology that "failed to accurately gauge the road conditions ahead and provide instructions."