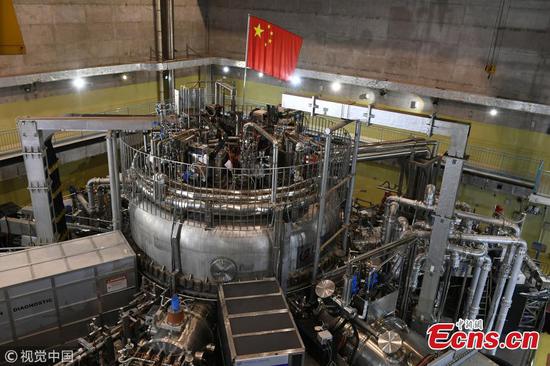 China's self-designed "artificial sun," a device to harness the energy of fusion, has made an important advance by achieving a temperature of 100 million C in plasma and a heating power of 10 megawatts, media reported, noting the progress could pave the way for developing clean energy through nuclear fusion. (Photo/VCG)

China plans to complete the construction of the HL-2M Tokamak device, the artificial sun, this year, achieving an ion temperature of 100 million degrees, an official at the China National Nuclear Corporation said on Sunday.

Duan Xuru, also a member of the 13th National Committee of the Chinese People's Political Consultative Conference (CPPCC), made the remarks on the sidelines of the top political advisory body's annual session that started on Sunday.

The Tokamak devise is designed to replicate the nuclear fusion process that occurs naturally in the sun and stars to provide almost infinite clean energy through controlled nuclear fusion, which is often dubbed as the "artificial sun."

Achieving an ion temperature above 100 million C is one of the three challenges to reach the goal of harnessing the nuclear fusion, and the core of the sun is widely believed to be 15 million C, meaning that the ion at the device's core will be seven times higher than that of the Sun.

The other two challenges are containing the fusion within a limited space in the long term, and providing a sufficiently high density profile, Science and Technology Daily reported on Monday.

"The artificial sun's plasma is mainly composed of electrons and ions, and the country's existing Tokamak devices have achieved an electron temperature of over 100 million degrees C in its core plasma, and an ion temperature of 50 million C, and it is the ion that generates energy in the device," Duan told the media.

To bring up the ion temperature to over 100 million C, we need higher device parameters, injects and absorbs more energy, and operates with a more advanced working mode, Duan said.

The new HL-2M device will possess such capabilities, and hopefully will elevate the current device's plasma electric current level of 1 trillion 3 trillion amperes, which shall greatly enhance the plasma's parameters, and the device power, providing a main technical support for China's participation in the experiment and operation of the International Thermonuclear Experimental Reactor (ITER) and the independent design and construction of future fusion reactors, Science and Technology Daily reported.

The ITER is a large international scientific project that is a global collaboration of 35 countries including China, Russia and the U.S.