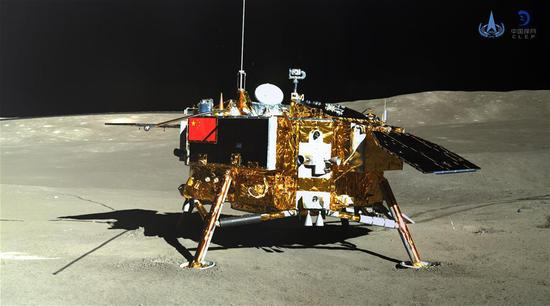 The night on the moon is dark and cold, yet Chinese scientists don't know exactly how cold it can be. The Chang'e-4 probe, which made the first-ever soft-landing on the far side of the moon, will help them measure the moon's temperatures.

A lunar day equals 14 days on Earth, and a lunar night is the same length. Temperatures vary enormously between day and night on the moon. Scientists estimate that the highest temperature during the day might reach 127 degrees Celsius, while the lowest at night could fall to minus 183 degrees Celsius.

In 2013, China launched Chang'e-3, the country's first spacecraft to soft-land on the moon. The scientific instruments on its lander are still operating after more than 60 lunar nights in the past five years.

"It was a success, but Chang'e-3 was designed according to foreign temperature data," said Zhang He, executive director of the Chang'e-4 probe project, from the China Academy of Space Technology (CAST).

"Without our own data about lunar temperatures, we don't know how cold a lunar night can actually be," Zhang said.

"Chang'e-4 will measure the temperature differences between the day and night on the moon, helping scientists estimate the properties of the lunar soil," she said.

Tan Mei, a consultant for the probe from CAST, said Chang'e-4 will switch to a "sleep mode" during the lunar night due to the lack of solar power, and rely on the radioisotope heat source, a collaboration between Chinese and Russian scientists, to keep warm.

"We need to transform heat into power to run the thermometry to measure the temperatures of the lunar surface at night," Tan said.

The lander is equipped with dozens of temperature data collectors, and the data they collect at night will be transmitted after the probe is wakened during the moon's daytime, said Li Fei, a designer of the lander from CAST.

Sun Zezhou, the chief designer of the Chang'e-4 probe from CAST, said the probe will get first-hand data by directly measuring the temperatures of the lunar soil, probe's surface, and its key interior equipment during the lunar night.

Used for the first time in a Chinese spacecraft, the isotope thermoelectric generation technology on Chang'e-4 is a prototype for future deep-space explorations, Sun said.

NASA's Curiosity rover also adopts this power technology, freeing it from the sunshine, sand and dust restrictions that have bothered its predecessors Opportunity and Spirit, he explained.

"It is a technology that we must master if we want to go to the moon's polar regions or deep space farther than Jupiter, where solar power cannot be used as the primary power source," he said.