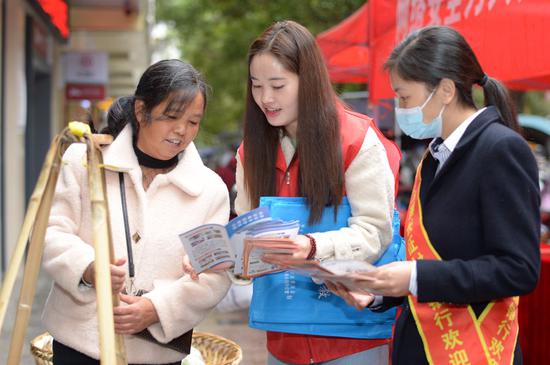 China is stepping up its protection of the rights and interests of the citizens, consolidating its standing as one of the world's safest countries and creating a better legal environment.

These are the messages resonating in the Great Hall of the People, as lawmakers deliberate reports from the country's top court and top procuratorate at the national legislature's annual session.

Submitting the reports for review on Tuesday, both Chief Justice Zhou Qiang and Procurator-General Zhang Jun emphasized a tougher stance against crimes targeting women and children, in addition to other measures to further improve the country's law-based governance.

The pledges followed the start of a 10-month special operation launched by the Ministry of Public Security last week to crack down on the abduction and trafficking of women and children.

Observers said that China has a sound legal framework for the protection of women and children, but the emphasis on the issue signals that authorities are willing to go the extra mile to ensure the people enjoy even better protection.

Xue Yufeng, another NPC deputy, said that in addition to a tougher crackdown, efforts must be made to ramp up legal aid and assistance to foster stronger synergy in protecting the rights and interests of women and children.

Protecting the safety of 1.4 billion people is an onerous task, but China has done a great job thanks to its increasingly sound legal framework and strict law enforcement.

Observers named long-term stability and rapid economic growth to be China's two "miracles." And underpinning these miracles is the rule of law.

The top court's work report says that China is "one of the safest countries" in the world.

Criminal cases of severe violence have seen a general trend of decline over the past decade, according to the top court. The top procuratorate's report also shows a drop in the number of prosecutions related to organized crime.

"Everyone has the feeling that this country is safe and peaceful," said national political advisor Liu Hongyu. The sentiment is also shared by many expats living in China, who often post photos and videos on social media about how safe it is to roam the streets at night in China.

"The fundamental goal of advancing law-based governance in all respects is to safeguard people's rights and interests in accordance with the law," Chinese President Xi Jinping has said.

On multiple occasions, Xi has stressed the need to let the people "see that equity and justice are served in every law, every law enforcement action, and every judicial case."

In the SPC report, Zhou said that courts must remain committed to upholding the principle of putting the people first, and always remain responsive so that the people feel that equity and justice are always with them.

A large number of cases concerning education, employment and medical service were resolved over the last year to address people's concerns, the report says.

China's top legislature has also stepped up legislation. The Noise Pollution Prevention and Control Law, for example, was recently formulated.

"This legislation aims to safeguard people's basic rights," said Zhu Guoping, an NPC deputy who took part in the drafting process. "People now feel that many aspects of their everyday lives are being protected by law."

Chen went on to say that the adoption of the law is also conducive to the development of the digital economy, a burgeoning but relatively under-regulated sector that plays a key role in China's high-quality development.

Legislation, law enforcement and the delivery of justice will jointly provide a strong legal guarantee as China moves to modernize with new growth drivers.

National lawmaker Liao Hongyu said that the timely formulation of legislation for the Hainan free trade port last year is a good example as it turned a free-trade policy into concrete rules.

He noted that the legislation embodies the aim of law-based governance to prioritize laying down a legal framework before building a free trade port.

"The rule of law is a vital criterion for evaluating the business environment," Liao said. And it directly determines the capability of a region to attract investment.

Data indicates that foreign direct investment in China is rising and businesses are upbeat about the market.

Delivering the NPC Standing Committee's work report to the national legislative session for review on Tuesday, top legislator Li Zhanshu said that high-standard legislation is required in many areas to accomplish the challenging mission of building a modern socialist China in all respects.

A modernized country is one under the rule of law. According to China's long-term development outline adopted last year, China will by 2035 have in place an improved rule of law for the country, the government and society.