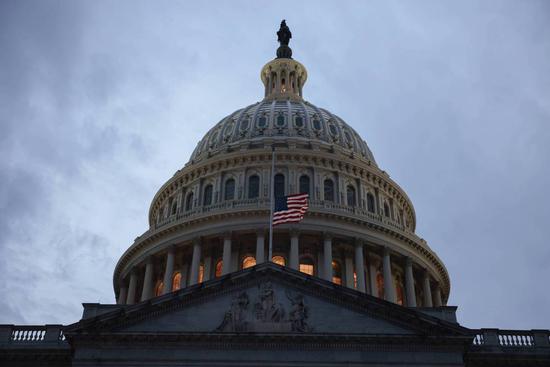 The American flag is flown at the U.S. Capitolx in Washington. (Photo/Xinhua)

As Beijing has offered a Global Development Initiative to rally international efforts to combat the COVID-19 pandemic and promote economic recovery, Washington is convening its so-called Summit for Democracy on Thursday and Friday, a move that observers said would serve to sow the seeds of division and confrontation worldwide.

But after the world watched the disregard for rule of law and mistrust of elections spread throughout the United States, the question is what moral authority does Washington have to lecture the rest of the world about democracy, they said.

Addressing the 14th Bali Democracy Forum on Thursday, State Councilor and Foreign Minister Wang Yi reiterated that democracy is not the privilege of an individual country but the right of people from all countries.

Some preach that Western-style democracy is a yardstick for democracy and they try to export it to, or impose it on other parts of the world, while others take a certain country's model of democracy as a dividing line to incite competition between different political systems and ideologies, Wang said in a video speech. "Such assertions are not true democracy, but hypocrisy in the name of democracy," he added.

The decision by U.S. President Joe Biden's administration to handpick which countries and regions ought to participate in his "Summit for Democracy" constitutes a return to obsolete Cold War paradigms and goes against the trend of multilateralism, said Alfred de Zayas, a professor of international law at the Geneva School of Diplomacy and International Relations in Switzerland.

"It is obvious that such a conference cannot serve peace and justice, because it excludes billions of human beings," Zayas said in an article published on the website of China Global Television Network. He was the United Nations Independent Expert on the Promotion of a Democratic and Equitable International Order from 2012 to 2018.

"Far from being an exercise in democracy, the U.S. summit artificially divides the world into two camps－those countries which the U.S. unilaterally considers democratic and those that are labeled undemocratic."

According to the U.S. Department of State, the summit will set forth an agenda for "democratic renewal".

However, observers said that the riot that took place at Capitol Hill in Washington in January to prevent the joint session of Congress from certifying the newly elected president has shown the world how badly U.S.-style democracy works in practice. In addition, U.S. efforts to promote its model of democracy globally have landed countries like Iraq, Syria and Afghanistan in disaster and itself in a disgraceful position.

Far from an example of "renewal", the summit reinforces the world view that the U.S. believes it has a monopoly on democracy, said Danny Haiphong, a U.S.-based independent journalist and researcher, and also a founding member of the No Cold War international campaign.

It begins from the vantage point that the U.S. considers itself to be in a position to teach others about the perils of "authoritarianism", Haiphong added.

Noting that "democracy" is being used by the U.S. as a cover for its hegemonic ambitions, he said the Biden administration's "Summit for Democracy" is just another opportunity for Washington to dress up its dangerous "America First" approach to politics in the garb of democracy.

Democracy is not a one-size-fits-all model, Haiphong said, and China and all nations have the right to pursue their own political and economic models of democracy free from external interference.

China and 30-plus nations currently suffering under U.S.-imposed sanctions, including Russia, Cuba, Venezuela, Zimbabwe, Eritrea and Belarus, have been excluded from the summit. Pakistan, which was invited to the summit, announced on Wednesday it will not participate. However, Taiwan, which is an inalienable part of China's territory, is on the list of invitees.

Analysts said such a summit is to rally "democracies" against what the U.S. considers to be "authoritarian" states, and the main purpose is to reassert Washington's hegemony as the so-called leader of the free world in order to reinforce its current efforts to deploy a new anti-China containment strategy.

Stephen Ndegwa, a Nairobi-based communication expert and lecturer-scholar at the United States International University-Africa, said that the world has been fed a unilateral view of democracy for many years.

The narrative has been based on notions that true democracy can only come from the West led by the U.S., which has adopted the carrot and stick approach in its perennial quest to "democratize" other countries, setting conditions for those who wish to have close relations with it, Ndegwa said.

However, he added, this coercion is gradually backfiring because of the gross interference of the U.S. in other countries' internal affairs and the crumbling of democracy in the U.S. as well.

Ndegwa commended China's whole-process people's democracy, saying that those who criticize China's political system fail to acknowledge that it is the only way to govern a country so vast and with a massive population of 1.4 billion people, the most populous globally.

"The Chinese truly follow the maxim that democracy is by the people and for the people."